Creationism never seems to go away and recently a petition has been made to the Scottish  parliament and below is the submission I produced for the BCSE (British Centre for Science Education). Below that are some of my explanatory comments which are my opinion and may or may not be those of other members of the BCSE.

Submission on behalf of the British Centre for Science Education (BCSE)  in support of Parliamentary Petition PE01531, Guidance on how creationism is presented in schools, by Spencer Fildes on behalf of the Scottish Secular Society (SSS)

I am the Rev. Michael Roberts, spokesperson for BCSE, which was formed in 2006 in response to the upsurge of creationist attempts to infiltrate education. I am a graduate in theology and geology and F.R.Hist.S, school Governor for 26 years, and Anglican priest dealing with church schools for 40 years, and have published on the history of religious responses to geology and evolution.

1. The vast age of the universe and the earth has been known since the 18th century, and evolution since 1859 or earlier, and thus no science makes sense without these facts. Any worldview which rejects them must clearly be seen as false, including Creationism with its denial of such basic and well-proven science. In the 19th century Scots Presbyterians were in the forefront of accepting both deep time and evolution, from Thomas Chalmers to Henry Drummond, to name but two.

2. In the past few decades, a strain of thought, variously known as creationism, creation science, flood geology, and Intelligent Design, has arisen, challenging these plain facts. This resurgent creationism has its roots in Seventh Day Adventism, but has now spread to more main-stream churches. Proponents of such creationism are well organised, well funded, and represented by such groups as Creation Science Ministries, Creation ministries International, Truth in Science, and Answers in Genesis, as well as the Seattle-based Discovery Institute, and its Glasgow-based offshoot Centre for Intelligent Design,  which may allow for an ancient earth but not evolution.

3. There has also been an influx of US-based (and occasionally Australia-based) fundamentalist churches, such as West Mains Church, East Kilbride (responsible for the distribution of creationist texts at Kirktonholme), Westwoodhill Evangelical Church (with representatives on the chaplaincy committees of five schools in South Lanarkshire), Craighalbert Church (providing the chaplain for four schools in North Lanarkshire), and Freedom City Church (also North Lanarkshire). In addition, Seventh Day Adventists are also represented on school chaplaincy teams, as are more traditional churches (Baptist, various Presbyterians denominations) that are often influenced by creationism.

4. It is almost impossible to determine the extent to which such creationism has influenced classroom teaching, especially as many Local Authorities regard the identity and affiliation of school chaplains as protected confidential information for Freedom of Information Act purposes. However, we note with alarm that, in addition to the reasons for concern listed above, the extreme anti-science West Mains Church was allowed to operate for eight years without question, that the Challenger Bus, which carries literature from Answers in Genesis, makes regular visits to many schools, and that at least two schools have organised debates or Q&A sessions with creationist speakers, thus placing creationism on an equal footing with scientific reality.

5. Present Scottish Government policy is to leave these things to the discretion of individual teachers. This is to place an impossible burden on them, especially as creationist utterances are liable to come from chaplains, who are not part of the teaching establishment, and may be put forward in contexts such as Religious Observance where they could hardly be challenged. Creationists are plausible, and well practice in presenting their arguments. They commonly make direct factual claims, based on spurious science, which pupils (or indeed teachers without a background in biology) will not recognise as the untruths that they are. The creationist tactic is to present their point of view as having an equal claim to be heard, thus appealing to reasonableness and fair play, and to maintain that the kind of policy sought in this petition is an unfair restriction of free speech. We would not accept such an argument in the case of Holocaust denial (or even climate change denial), and should not accept it in the case of evolution denial or old earth denial either.

Sometimes I despair when people, either Christians or not, think vast geological time is contrary to faith and has only recently caused a problem. Christians have suggested vast time since John Ray

and Edward Lhwyd tentatively did so in 1680 in Snowdonia. By the early 1800s, most educated Christians accepted deep time, and many early geologists were Christians, e.g. Adam Sedgwick, William Buckland. 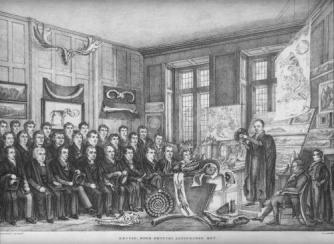 Hugh Miller’s, 1857 book The Testimony of the Rocks is worth reading today. In fact, by 1859 hardly any Christians accepted an earth only 6000 years old.

However there was some opposition to geology from 1817 , but these devout anti-geologists were ripped apart by people like Sedgwick, Buckland and Miller, so by 1859 they were essentially extinct .

And so it was in all the UK until about 1970  when Creationism began to make its presence felt in Britain.

2. The Roots of Creationism

We need to be clear what Creationism is. Origianlly Creationism was obviously the theistic belief that God is creator, which is implicit if one believes in God. Too often Creationism i.e. a 6/24 creation several thousand years ago is regarded as the traditional view of the church. Until geologists (believing and unbelieving) demonstrated the vast age of the earth, Christians were imprecise on when creation happened. After all, they had no scientific evidence. So some like Archbishop Ussher favoured creation 6000 years ago, and gave us the date 4004BC.

However many were imprecise about the time factor, and in 1690 Bishop Simon Patrick of the duration of Genesis One, said delightfully, “It may be some time”!

Creationism, as we have it today, is that body of opinion which rejects and rubbishes much of science – something Ussher and his contemporaries never did. In a sense, Creationism started with the visions of Ellen White of the Seventh Day Adventist Church in the 1880s. These were taken up by George McCready Price (1870-1963) who wrote dozens of books trying to prove a young earth. He had minimal science education as is manifest in his books. Despite his profusion of books most American evangelicals did not follow him and held to an ancient earth but rejected geology. The Scopes Trial of 1925 had nothing to do with Creationism in the young earth sense as most anti-evolutionists who opposed to Scopes thought the earth was ancient. Price had no influence in Britain in his lifetime, as Christians were resolutely old earth if not evolutionist. 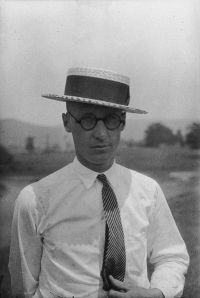 To repeat the well-known story, Creationism took off in the USA in 1961 with the publication of The Genesis Flood, a book of no scientific worth.

While involved with University Christian Unions in the late 60s Creationism never came up. It was probably just as well, as I would have told them Creationism was twaddle and if required for a Chrsitian, then Christianity was twaddle too!! HoweverCreationism only came to the fore after The Genesis Flood was published in the UK in 1968. And so Creationism slowly grew in the UK from then on and began to infiltrate churches. (See Ron Numbers The Creationists or my Evangelicals and Science)

They initially won over independent evangelicals and then made in-roads into mainline denominations. This resulted in the being a good 5 – 10 % of Anglican clergy being Creationist today. It is about the same with Scots Presbyterians. I am sure Sedgwick, Chalmers and Miller are turning in their graves.

Rightly or wrongly church leaders have not challenged Creationists and thus have let them grow. We really needed a few Sedgwicks and Millers to sort them out, rather than pat them on the head and regard them as loyal clergy. How can clergy be loyal to Christ or his church if they propagate the falsehood that is Creationism.

At present I am reviewing After the Monkey Trial by C. M. Rois, which traces out alternatives to Creationism among evangelicals in both the USA and UK since the 1940s. The two main groups are the American Scientific Affiliation and the Research Scientists Christian Fellowship, now Christians in Science, which have given an alternative which accepts all of science including geology and evolution.

It seems paradoxical that despite these groups Creationism has thrived. Since the late 70s Creationists from mostly the USA have given lecture tours in Britain and after 1990 these became a flood with groups like Answers in Genesis becoming very evident. Speakers like Ken Ham and others from AIG and CMI have been extremely active.

My experience of schools is English and Welsh but not Scottish. There have been controversies before in England as with St Peters School, Exeter, an Anglican school, in 2010 and 2011, when Philip Bell of Creation Ministries International was invited on a science brief. It was halted by the opposition of a parent and BCSE involvement.

The Scottish petition seems to have been triggered by an issue in a Scottish primary school in August 2013, so ably described by Paul Braterman http://paulbraterman.wordpress.com/2013/09/16/reviewed-young-earth-creationist-books-handed-out-in-scottish-primary-school/

That caused parents to object and the education authority to act.  This is possibly the worst example in Britain but there have been others

The easiest is what should be taught in science. Creationism is simply not science, despite protestations from Creationists and sympathisers and thus has no part in any science lesson.This is clear in English government guidelines. It is risible to claim dinosaurs lived along side humans.

We soon come to another problem. Who takes school worship? Quite often both in county schools and church schools it may be taken by those outside the teaching staff. Frequently ministers of all denominations lead worship and, at times, those outside local churches are invited. I obviously frequently led worship in churches schools but also did the same for country schools and was involved at times in RE. It would have been easy to introduce Creationism or any other wacky religious viewpoint! Needless to say, I didn’t.

Within schools there have been cases of creationism taught as science but it is often under the radar.

We have seen in Rotherham and the Trojan Horse in Birmingham schools what misguided tolerance can do. The BCSE was noting problems in these Birminghams schools last decade as there were accounts of creationism being taught in some schools. Too often LEAs (Local Education Authorities) and Diocesan Boards of Education tend to avoid the issue, and seek to ignore it. A case of the wrong type of tolerance.

Creationism needs to be opposed in both schools and churches as it is utterly false and inherently dishonest. We should not be any gentler.

The Church of England and Creationism

3 thoughts on “Creationism in Scotland’s schools”