Before Cuadrilla announced their intentions to drill at Roseacre and Little Plumpton near Blackpool on the Fylde in Lancashire, the area was typical of the rural Fylde. As the area is flat with fairly empty roads, I cycle the whole area and enjoy not having too much traffic except silly locals on mobile/cell phones.

These photos are taken within ten miles of Caudrilla’s two sites, and give an impression of the flat and pleasant countryside. 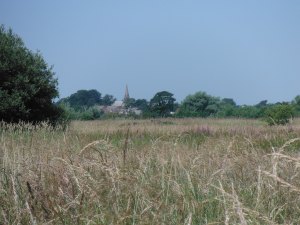 However in February soon after Cuadrilla announced their intentions signs began to appear attempting to highlight the supposed dangers of fracking, but infact, highlighting the confusion of some residents and the success of the anti-fracking groups like Residents against Fracking; Fylde RAFF

The site lies just west of Blackpool on the A583 and is in the middle of fields 500 metres from the nearest houses, though some claim 300 yards! In August a neighbouring field was occupied by fractivists including Tina Louise Rothery and by mid-August. No Dash for Gas and Reclaim the Power had arrived and on 18th August occupied the wrong buildings in Blackpool. I will not say anything about the subsequent legal action……….

These hardly need comment and many will spot the terminological inexactitudes on each. Since they appeared a lady living 200 yards of these has complained to the press, as reported in the Sunday Times, that the value of her house has fallen, yet it sports a no-fracking sign, as do most houses on the lane.

And so five miles north east to Roseacre

This is approaching the hamlet from the north. The Not for Shale sign appeared in late March and has been removed. I deal with the duplicity of this Greenpeace inspired sign in

and so in both Roseacre and Wharles, a mile away, anti-fracking signs proliferate. (I may add that last week when I cycled through I nearly choked on smoke from one resident’s coal fire. )Here are some – without comment

(Who is barking mad?)

Since the signs started appearing in February at least one person has not been able to sell their house for the asking price. The question is – is the problem the threat of fracking or the proliferation of Not for Shale signs and other scaremongering posters.

Recently a report from the Lancashire County Council referred to health risks including mental illness. One has to ask whether this is genuine or has it been induced by the scaremongering residents have been subject to by fractivists. sadly some are plying the residents with inaccurate information. Most active among these have been RAFF (Residents against fracking;Fylde) , the famous oil and gas engineer and expert advisor to so many groups (!) – Mike Hill. These people must take responsibility for what there have done to the people of Roseacre, Wharles and Little Plumpton.

Whatever the rights and wrongs, these pictures demonstrate the uphill PR battle for fracking in Lancashire.