Can we, as evolved apes have a soul?

A reader asked the question in the Church Times on 28th October 2017 (sub-christian horror comic for Anglicans as one bishop put it);

The other day, a friend asked me if the Church believed in evolution. I said that I thought in general, it did accept it. He then asked when the soul arrived: did Homo Habilis have a soul two million years ago? Could someone comment on this………..?

To answer briefly: most in the churches accept evolution and none of us have a soul, whether homo habilis or us. Now having shocked some by saying no one has a soul, let me explain.

Sadly, the Churches only in general accept evolution. Many evangelicals have fallen for Young earth Creationism and Intelligent Design. Many Christians nod acceptance to evolution but do not grasp the implications.

As science, evolution is well-nigh irrefutable as there is no scientific evidence against it. Some Christians oppose it theologically and others of a religious bent find evolution smacks of reductionism.

But let’s consider the evidence for evolution. Until about 1660 most favoured an earth some 6000 years old as Archbishop Ussher argued for.

However by 1690 some like the Rev John Ray thought the earth was much older from considering rocks strewn around Snowdonia.  Move on a century and almost all scientists were convinced that the earth was  “très vieux” as the great Swiss savant and early geologist de Saussure claimed from the evidence he found in the alpine strata. In the early 19th century geologists ALL found evidence for an ancient earth and worked out the systems Cambrian, Ordovician etc. Many of those geologists were Anglican clergy, some of whom thought the earth was older than the 4.6 billion years we hold today.

Fossils galore were unearthed and it was soon apparent that some life  forms had gone extinct like the dinosaurs and that there was a succession of life forms. Before Darwin this was explained by God coming back and creating new forms which were slightly different from the previous ones. It was clear that God must have come down a myriad times to do this, but Darwin cut the Gordian Knot in 1859 with his theory of evolution in The Origin of Species.

Though he was first convinced of evolution by the fossil record, in that work he garnered evidence form every field of biology as well. Of course we KNOW that the church opposed Darwin at every turn and scientists simply took it on board. That facts support that ! The first to cite Darwin’s (and Wallace’s) theory in a paper was Rev H.B. Tristram, an evangelical vicar. The biblical scholar and noted mountaineer Rev F.J.A.Hort accepted it in a trice as did the Rev Charles Kingsley, who incorporated it into his Water Babies. As for the scientists most physicists rejected it. No, the churches did not reject Darwin and within a decade most accepted a form of evolution.

My spoiler for Anglicans is that from 1855 virtually no Church of England clergy thought the earth was only 6000 years old and most accepted evolution from 1870, though often with caveats. Or at least that was the case until the 1970s, when some evangelicals started to believe in Young Earth Creationism and now some 5% of vicars are young earthers, believing that old Ussher was essentially right with his date of 4004BC. The effect of this has been bad, as, in the attempt, to be inclusive, this is recognised as a valid position for Christians, whereas it is simply false and based on mis-reading the bible and mis-representing what science says.

One reason for objecting to evolution is how suffering came into the world and too many still consider it came form human sin. That goes back to Ussher’s poetic contemporary John Milton’s epic poem Paradise Lost; https://michaelroberts4004.wordpress.com/2016/02/19/why-the-apple-didnt-kill-adam-and-eve/

Beyond that, there is the problem of the soul. Why it should be a problem as we do not have a soul, but it is. Many think humans are made up of two or three bits; body, soul (and spirit), with the implicit idea that the soul is tacked onto a body rather like a bolt-on extra. This idea of two/three bits stems not from the Bible but Platonism, which was adopted by the early church, with disastrous results ever since. Once we think of the two bits we distinguish between the bodily/earthly which is bad and the spiritual/soulish which is good. As a result historically Christians have not valued creation except as a vehicle for the redemption of the soul. Some, like the Black Stocking Calvinists of the 17th century took it to the logical conclusion and reckoned that you could kick and mis-treat animals as they had no soul. Yuk!

If we are not “souls with legs on”, so what are we? From Gen 2 vs 7 we read “man became a living being” the word for “being” is nephesh which is translated into Greek as psuche, which is taken as soul. Some animals are also nephesh. This we are “living souls” or “living beings” rather than bodies which have souls, which is the bit which survives death. That means that we see ourselves as an integral part of creation and that we cannot consider ourselves separate from the rest of the natural world. This has been a problem for millennia and the fruits are seen in the industrial world, where it is implied we can, as it were, escape the natural world – whether through technology or religion. Far better is to see ourselves as part of nature as much as insects are. The Green movement has grasped this, but often in a funny way!

At death our soul does not leave the body to fly away for the resurrection if we are lucky! We cannot say what will happen, beyond that for a Christian they will look to Jesus and his resurrection, when he was not raised as soul or spirit, but as a resurrected body. At least that is the Gospel picture and is developed by Tom Wright in his big book Resurrection. So what happens to us? I simply do not know and here I can only look to Jesus Christ and trust in Him. That will not convince those who see humans as body and soul (or souls with legs on as I prefer to say) or to those who are not Christian.

Some have tried to cut the Gordian Knot on this by suggesting that the human body evolved through former living things and then God introduced a soul. This is put forward by many including Sam (R.J.) Berry and Denis Alexander (see his Creation or Evolution), both of whom I respect greatly.

I simply do not accept their view that humans were given a soul some 10,000 years ago. To put it flippantly, they are evolutionist until 10,000 years ago and then they become Creationist at the last minute. Exactly when an earlier ape evolved into an ape we would define as homo sapiens I do not know. It goes without saying I do not accept a historical Adam.

I cannot give a nice simple answer beyond saying that we are created by God – who took a long time over it right through geological time. I prefer to say we are living souls/nephesh/psuche rather than having a soul as if that is a bolt-on extra. Without going into details this makes better sense of the biblical teaching, the nature of Jesus both as a human and in his resurrection and means we are closely tied to all of creation/natures and also to God. 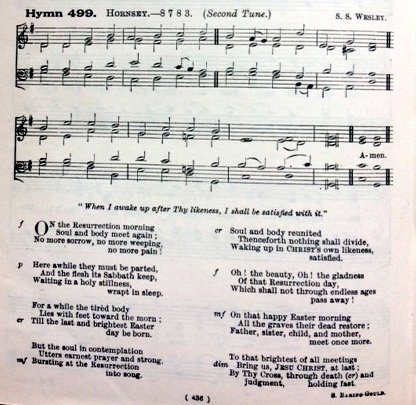 The second line “soul and body meet again” reflects this inadequate Greek understanding of disembodied souls and de-souled bodies. It shows how deep-seated this error is.

3 thoughts on “Can we, as evolved apes have a soul?”