If you read many historical studies of Britain in the 19th century, you will read that a major conflict was over science. That claim is overstated. Here is a brief overview.

From reading many books on church history, general history or popular science, it is easy conclude  that advances in geology in the eighteenth and early nineteenth centuries and then evolution after 1859 had gradually been undermining belief in God as Creator as well as an almost official literal reading of the early part of the book of Genesis. The actuality is rather different. 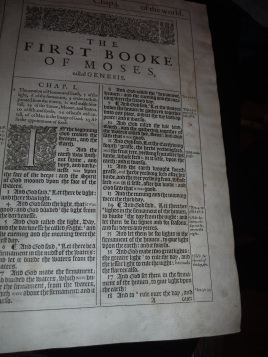 So often the work of Archbishop James Ussher is cited as the “official” view of the churches. In 1656 he published his Annales Veteris Testamenti (Annals of the Old Testament) which gave the famous date of creation as 4004BC. (Actually, it has to be worked out from his use of the Julian calendar.)

Ussher is often pilloried for this, with the charge that he inhibited the development of geology. That is false, even though I was taught it in geology lectures!! Ussher was in a long line of scholar historians/chronologists whose detailed studied suggested the earth was only some 6000 years old. Despite their bad reputation Ussher and others laid the foundations for a truly historical way of looking at the world both for human and earth history as Martin Rudwick argues so forcibly (Earth’s Deep History p9-30). Slowly this historical approach opened up historical understandings whether of Egypt or the strata.

Up until about 1660 there was no scientific reason to doubt that the earth was a mere few thousand years old as no one had studied what we now call geology or earth science.One of the first was Nils Steno in the 1660s – he later became a Catholic bishop. He was followed by Robert Hooke, Edward Lhwyd and Rev John Ray a few years later. All of these tentatively wondered if the earth was somewhat older! In fact by considering the vast number of boulders in Nant Peris in Snowdonia, Lhwyd reckoned the earth must be older as only two or so boulders had fallen into the valley in living memory. So he suggested a great age for the earth. His argument was wrong as these boulders were place their by ancient glaciers. 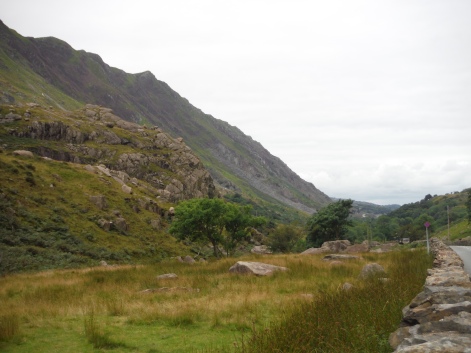 Nant Peris. Just here you can count over 20 boulders. If only one boulder fell into the valley every 50 years, then these 20 would indicate 1000 years . As there are thousands , then that would be 50,000 years and more. It is not a good argument but it shows that people were open to an old earth in 1680.

During the 18th century more and more studied strata or considered the implications for Christianity. These were a mixture of Christian (often clergy) indifferent or deistic.As the century progressed the idea of a massive world-wide flood (Noah’s) became totally unlikely and the concept of “Deep Time” became irresistible. After 1750 few held on to the idea that the earth was a few thousand years old and geological field work throughout Europe was building up a picture of an ancient earth, whether Hutton in Scotland, de Luc in Geneva, De Saussure in the Alps, Werner in Germany, Hamilton on Vesuvius (while his wife Emma was with Admiral Lord Nelson!), Rev J Michell and William Smith in England, Fr Soulavie, Cuvier and Buffon in France. Clergy were not absent from this group. Space forbids more detail! At no point during the 18th century was geological time used to attack Christianity as the controversy was not whether the earth was a few thousand.years old or ancient, but whether it was old (say hundreds of thousands eg Jean Andre Deluc)  or millions of years old (James Hutton).

That is borne out by theological writers as where a young earth was accepted it was because it was the traditional view and not against geology. As the 18th century progressed, more Christians accepted an ancient earth WITHOUT it conflicting with their faith. With some early works accepted a young earth and later ones an old earth.

The early 19th century saw great progress in geology as the order of strata was largely worked out (i.e. Cambrian, Ordovician, Silurian, Devonian etc). It is true to say that the lion’s share was carried out in England. Many of these geologists were devout clergy  like Townsend, Buckland, Conybeare and Sedgwick. Others included Lyell a deist or Unitarian. Sedgwick and Townsend were Evangelicals. Much is often mde of a controversy between Uniformitarian and Catrastrophist in this period, but both groups were convinced of vast geological time and their geological methods were almost identical as became apparent to me when I studied some of what Buckland, Darwin and Sedgwick had done in the field in Wales from 1820 to 1850, using their field notebooks and published work. The difference was on matters of interpretation rather than anything else, and, even then, their conclusions were very similar.

Buckland (in a hyena den), Sedgwick and Lyell

Most theological writers from 1800 accepted Deep Time and this is clear in commentaries. The only exceptions are the small group of Scriptural or Anti- Geologists who flowered from 1820 to the 1850s, who insisted that the earth was 6000 years old and geologists were wrong. These were comprehensively rebutted by Buckland, Sedgwick, Pye Smith and the Scot Hugh Miller.

Over these two centuries there was much ebb and flow with Noah’s Flood. Initially many thought all strata and fossils were laid down by the flood, but this was slowly rejected. Some concluded that there were a succession of floods, which resulted in the deposition of the various apparently discrete series of strata. Others, notably William Smith, Sedgwick (until 1831) and Buckland reckoned that the youngest strata (i.e recent glacial deposits) were laid down by the Flood. Buckland tied this into the Ice Age as well, but note that it was he who introduced ideas of an Ice Age to Britain. By 1850 few thought that Noah’s Flood was more than a local inundation.

To conclude; the awareness of Deep Time caused only limited problems for some Christians, but it is fair to say that evolution was a greater, but not insuperable, issue, as though the question of time and thus the non-literal nature of Genesis was almost entirely accepted by 1859,  the unique status of human beings was implicitly challenged by evolution thuis leading many Christians to question or challenge it.

Prior to the publication of the Origin of Species  in 1859, most British scientists accepte some kind of ill-defined special creation of species, but the simple idea of special creation was crumbling because of advances in biogeography (did God creat three different species of Rhino on different islands in Indonesia), hybridization, change of living forms over times as revealed by palaeontologists and so on. There had been attempts to give an evolutionary perspective before; Erasmus Darwin, Lamarck, Geoffroy St- Hilaire, not to mention the anonymous Vestiges of 1844. Darwin began his note books in 1836 and published two evolutionary drafts in 1842 and 1844, and then took on an enormous project on barnacles. Claims that he delayed publication as he was afraid of the church establishment have no foundation. He was a slow and methodical worker suffering from bouts of illness. It is often not realized that after the age of 32 he could not walk more than 5 miles. Finally he was jolted into publication due to receiving a paper from A R Wallace in June 1858. After a joint paper he wrote a shortened version of his “big book” which was published in November 1859. The reaction was mixed. Physicists and geologists did not like it. More biologists, especially botanists, were far more accepting. A moderate number of Christians soon accepted the theory. The first person to use the Darwin/Wallace idea of natural selection in a scientific paper was Canon H.B.Tristram of Durham an evangelical. 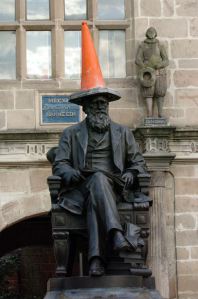 Darwin’s statue in Shrewsbury!! and a Punch Cartoon

Many Christians opposed but virtually none from the point of a literal Genesis. Most notorious is Bishop Samuel Wilberforce, a competent naturalist, who reckoned evolution reduced humans to mere apedom and thus moral capabilities. For further details bring the discussion up to date, read; https://michaelroberts4004.wordpress.com/2015/02/23/evolution-and-religion-in-britain-from-1859-to-2013/  Very briefly, more and more Christians came to accept evolution in the next few years, but insisted God “intervened” for the creation of life, of sentient beings and finally, humans. So much so that The Fundamentals of 1910 included several articles arguing for evolution, which is not what all would expect.

Ultimately the so-called conflict was a reading back from the 1890s by American writers like Draper and Andrew Dickson White, who claimed WITHOUT EVIDENCE that there was a terrible conflict between science and Christianity since the time of Kepler in 1543. In the last forty years this “conflict thesis of science and religion” has been systematically refuted by a new generation of historians of science, but the false ideas have proved very persistent.

It is probably right to say evolution was more a problem for the less educated, who had probably been taught a literal view of the bible in Sunday School. As today perceptions count for much on understanding science and religion

Slowly the theory of evolution was popularised, and many people came to perceive conflict between science and religion from the 1890s, with the latter as somehow obscurantist, and standing in the way of ‘progress’. This persistent myth has coloured the ideas of many.

In the long run, the theory of evolution tended to dominate human consciousness; all kinds of human, social and intellectual developments were seen in terms of ‘evolution’ towards a) a predetermined goal; and b) ‘progress’ (as interpreted by the theoriser). In the late 19th century Social Evolution was overdone, but the allegations that evolution formed the basis of Nazi ideas is very shaky and is over-stated by some Christians to the point of inaccuracy.

P.S. I have deliberately left out the implications of deep time and evolution for Christianity. But here are what has often come up.

The Moral and Religious implications of Darwin

There are many cited and here are some ignoring  all scientific issues on whether or not evolution occurred.

5 thoughts on “Geology, evolution and Christianity in the 19th century”