Yes, it is the old chestnut of Young Earthers that the age of rocks is based on a circular argument from evolution. It took me back to 1971 when I made the felicitous mistake of going to L’Abri to sit at the feet of the evangelical guru Francis Schaeffer. I arrived ther all bright-eyed and bushy tailed thinking of all the wondrous things I would learn in the next four weeks. I learnt much but not what I had expected.

On my first morning i was sent to Shaeffer’s son-in-law Udo Middlemann to discuss what I would study. I explained that I was going into the Anglican ministry and had just returned from 3 years working as an exploration and mining geologist in Uganda and South Africa. He then told me what I needed to read; -Morris and Whitcomb The Genesis Flood and a host of other YEC books. I remember blurting out that they were nonsense but he insisted.

My next few hours were most unpleasant as I read The Genesis Flood  and felt they might be onto something. With all the references and apparently academic substance the book was intimidating. But then two things changed that . Second was the misrepresentation over radiometric age dating (My university – Oxford – was quite good on that) and first and foremost the section (p135ff) claiming that the relative age dating of strata leading to the formulation of the Geological Column was false as it was based on a circular argument, which is what his grandson argues in the meme from ICR.

By now I was spitting feathers and realised that the whole argument of Morris, father, son and grandson, was simply dishonest. My reason was very simple. I had just returned from 30 months of field geology in Uganda and south Africa where I had mapped a couple of thousand square miles of Precambrian strata. Most were a series of sediments; conglomerate, sandstones, odd lava , limestones and tillites. I found just one fossil – a stromatolite  – and possibly walked over some ediacara-style rocks. I worked out the order of deposition and produced my own local geological column and with the aid of a handful radiometric dates put numerical dates to the rocks. In 1971 nothing had been published except my own company report, but since then geologists have produced the same geological column in essentials. I was a twit not to publish.

Stinkfontein sandstones, with some lavas

So how did I do it as the Morris’s say I can’t without fossils?

It was following the Principle of Super-position and I slowly worked it out and traced beds across faults etc. After I worked in a very small area by an ancient copper mine, which proved to be too small to be viable, and got the idea of the regional geology, I spent months traversing and area of some 40×30 miles slowing elucidating the strata. Apart from being totally confused by what I now know to be a large area of slumped tillites(Glacial deposits) I made a coherent map, and then God got other ideas for me. That is why I went to L’Abri before going to theological college, but that may be God’s sense of humour.

I started to explain to those at L’Abri where Morris was wrong and wondered if I would go the way of Servetus. I gave one of their Farel lectures which were kept in their library. As a family we went to L’Abri in 1998 but my lecture was missing, but no others seemed to be missing.

Thus was my introduction to YEC.

If the Morris’s are right with is meme then no order of strata or the Geological Column could have been worked out before Darwin came along in 1859.That is not quite the case.

I find the best way of considering the age of rocks, both in relative order and in absolute age is to see how geology has developed in the last 350 years.

We start in the 1660s with Nils Steno, a Dane who became the Catholic Titular Bishop of Titopolis. From Denmark he went to Italy and looked at strata and worked out his Principle of Super-position i.e. where there are a pile of strata the oldest will be at the bottom. This is obvious but he was the first to see the significance. This works well in working out the order and history of strata – unless they have been turned upside down or slid over other rocks as with the Moine Thrust. Steno laid the foundation and then “poped” and others slowly carried on.

Geology started to take off in about 1780 all over Europe, and if you want to know more read Rudwick’s books! For my purpose in 1788 Prof Michell of Cambridge had worked our a geological successsion from the Chalk down to the Coal strata in what was to be the Namurian in the Carboniferous.

To remain with my Brexit history of geology and overlook geologists across the Channel the next key person is William Smith, who while he was still a Young earther in the 1790s, started to use fossils as stratigraphic markers helping to give the order of strata. By 1802, thanks to local vicars Townsend and Richardson, Smith moved to an old earth but rejected evolution, or rather knew nothing about it. In 1815 he produced his wonderful map of England and Wales, which is remarkably accurate. I find it incredible that he got the geology of the Fylde essentially correct as there is only one rock exposure (of triassic) in 200 square miles.

At the same time as Smith, Brogniart and Cuvier were doing similar work around Paris on Mesozoic strata and were using similar methods and like Smith were unaware of or ignored evolution. For more details read Rudwick’s books.

By 1820 the principles of geology elucidating the strata in an ancient earth were well founded. However, though the historical order of strata was known it was not possible to give actual years. At that time the geological order was known down to the Carboniferous. Below that, what we now know as the Precambrian, Cambrian, Ordovician and Silurian, everything was mystery and muddle and on Smith’s map summed up as Killas.

In 1822 Rev John Henslow of Cambridge went to Anglesey and produced a fine mapand memoir which is the first study of the Precambrian. The map is below. Even today 200 years on, his work is still remarkably good. I found it fascinating going round Anglesey using his and more modern geological maps and was amazed at his skill.

about the same time Rev William Conybeare dealt with Carboniferous and so by 1830 it was only the older rocks to be sorted. That started when Murchison and Rev Adam Sedgwick went to Wales in 1831. Murchison went to Mid Wales and was lucky to meet up with Rev Thomas Lewis, a pupil of Sedgwick, who took him to the outcrops, which are now seen as Devonian lying conformably on”Silurian” Murchison had cracked it, but never properly credited Lewis.

Meanwhile Sedgwick started in Shrewsbury staying with the Darwins. He went a little way up Long Mountainand only found old strata (now Silurian). Had he and Darwin gone to the top they would have found Devonian sitting on Silurian. He missed it and went round north Wales where there was no Devonian or Old Red Sandstone so never found a downwardly conformably sequence. So after three weeks, and after Darwin left to go shooting but went to the Galapagos instead, Sedgwick began work near Llanberis below Snowdon in what is now Lower Cambrian.

Jim Secord describes their work and the falling out of Sedgwick and Murchison but the upshot was to delineate the Cambrian (Ordovician) and Silurian.

In the early 1840s attention turned to Devon and the Devonian was elucidated.

I cannot leave this without popping over the Channel where similar work was done. There the French geologist D’Orbigny worked out the concept of stages, mostly in Normandy. (There is a noticeboard about his work at Arromanches.) D’Orbigny was a Protestant and evolution-denier! In part of the Jurassic he worked out nearly 20 stages and reckoned that at intervals God wiped out one set of fauna and then replaced them with a slightly different group. Evolution a la Darwin is so much simply and doesn’t have God popping back to meddle every few million years.

So by 1859 geologists from all over Europe had worked out the order of strata and that the age of the earth was vast but immeasurable. Many made estimates and here are two from the 1860s; Thomas Huxley reckoned the age of the earth to be about 100 million years and Rev Samuel Haughton, Prof of Geology at Dublin and perhaps influenced by Ussher’s dating recroned the base of the Cambrian to be 1800 million years. Haughton wrote strongly against Darwin! 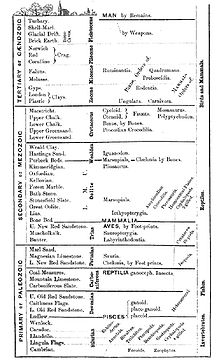 And so we come to Darwin and The Origin of Species  in 1859. As befits a good geologist Darwin simply used all geological findings including vast ages and in his book developed his theory of evolution from all available biological and geological evidence. If anything, we have to say that evolution is dependent on geolgy and vast ages and not vice versa as the Morris’s falsely claim

For the next fifty years many tried to work out the age of the earth with Lord Kelvin firstly putting the limits at 100 million and later to 24 million. Some geologists were not happy! With the discovery of radioactivity things changed as this was used to “date” rocks starting with Boltwood in 1907. Soon it was clear that the age of the earth was billions and not even millions.

From 1913 Arthur Holmes dated the age of the earth at 1.8 billion and slowly refined and increased the age. (His department were not to keen on his dating Dorothy Raynor) Using model lead ages from 1946 Holmes and Claire Patterson (well-known for pointing out the dangers of lead in petrol) concluded that the earth is 4.6 billion and that has not chnaged for 70 years. Since 1946 radiometric dating has developed form simply using 3 dates as Holmes did in the 1930s to using millions!! Again radiometric age dating has nothing to do with evolution as it is based entirely on the non-evolution science of radioactive decay and physics.

In this brief blog I have discussed  – and shown – that geological arguments for Deep Time  are totally independent of evolution. This is both for relative time which was worked out in detail before Darwin and absolute time which come form radiometric age dating which has been used for over a century.

Morris’ argument goes back to Henry Morris in 1961, but he swiped it from McCready Price who put it forward 50 years before.

It is simply a lie to say what the Morris’s say.