In the UK we get fed up of the terminological inexact reports and campaigns of Friends of the Earth and Greenpeace. In Canada GP come out with the exquisite euphemism

heated rhetoric is the coin of the realm.

Less delicately that would be “bloody lies” 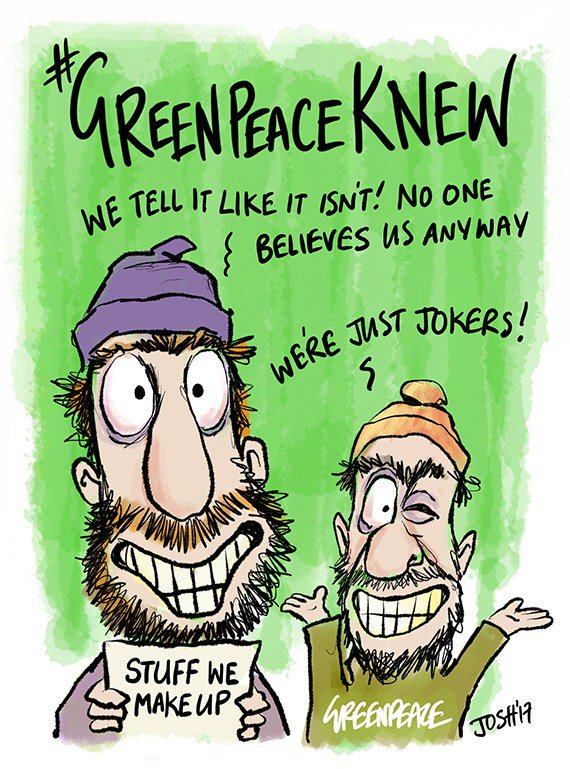 But we have the same in Britain over fracking and possibly over bees.

And, of course, this is what Friends of the Earth were doing with this leaflet

It seems that the same thing is happening in North America  and here is an article about Greenpeace at it in the National Review, who would probably regard me as a pinko.

by RICHARD GARNEAU March 2, 2017 4:00 AM A company unfairly attacked by the environmental group has sued it. A few years ago Greenpeace and allied groups chose my company, Resolute, Canada’s largest forest-products company, to be their next victim. They compiled a litany of outlandish assertions: We were “forest destroyers,” for example, aggravating climate change, and causing a “caribou death spiral and extinction” in Canada’s boreal habitat. Greenpeace harassed companies we do business with, threatening them with the same sort of smear campaign that they launched against us and even instigating cyber-attacks on their websites. And they bragged about the damage — $100 million, in Canadian dollars — that they claimed to have inflicted on our business. They were lying about our forestry practices, so we did something that none of the group’s other targets have yet found the wherewithal to do: We sued them, in Canada, for defamation and intentional interference with economic relations, and in the United States under RICO statutes. A funny thing happened when Greenpeace and allies were forced to account for their claims in court. They started changing their tune.

Their condemnations of our forestry practices “do not hew to strict literalism or scientific precision,” as they concede in their latest legal filings. Their accusations against Resolute were instead “hyperbole,” “heated rhetoric,” and “non-verifiable statements of subjective opinion” that should not be taken “literally” or expose them to any legal liability. These are sober admissions after years of irresponsible attacks.   No “forest loss” was caused by Resolute, the groups concede — now that they are being held accountable. Of course, these late admissions are consistent with the findings of just about every independent journalist and commentator who has covered the dispute, from the Wall Street Journal editorial board to Enquête, a Canadian version, roughly, of 60 Minutes. Even Steve Forbes weighed in, calling our lawsuit “an outstanding example of how unfairly attacked companies should respond.” Peter Reich, one of the world’s leading forest ecologists, has said that Greenpeace has “a fundamental disregard for scientific reality.” RELATED: In a ‘Post-Truth’ Era, Greenpeace Lies to Raise Money Finally hearing the truth from Greenpeace itself is vindication, even if it comes in the form of a tortured defense of its actions, rather than a simple apology. Remarkably, despite admitting in court that its rhetoric against Resolute is not true, Greenpeace continues to disparage us publicly and privately. Just a few weeks ago, we sent it a cease-and-desist letter demanding that it stop sending to our customers threatening letters accusing us of the “destruction of forests in Quebec and Ontario.” Some news outlets in the United States have filed amicus briefs on behalf of Greenpeace, on free-speech grounds. But freedom of speech is not the same as libel and slander. And the public should ask the outlets when it can expect scrutinizing, critical coverage of what Greenpeace itself now admits are deceptive practices. More than a billion trees. That’s how many Resolute’s workers have planted in Ontario’s boreal forest, in addition to the hundreds of millions that workers have planted in Quebec. Yet for years now, the eco-provocateurs at Greenpeace have been raising money off the calculated mistruths that we are somehow “responsible for the destruction of vast areas of forest.”   Greenpeace is marauding not just our company but a way of life, one built on nurturing healthy forests that are the lifeblood of the people who live there. So far they have acted with virtual impunity and profited handsomely. One Greenpeace executive was even caught laughing on camera when he was confronted on a leading broadcast program with photos of a forest, affected by a wildfire, that the group erroneously said was “destroyed” by Resolute. It was morally wrong and yet another example that, as Greenpeace puts it, “heated rhetoric is the coin of the realm.” For me, confronting this barrage of misinformation has been more than just about business ethics. It is very personal. I was raised in Quebec’s Saguenay–Lac-Saint-Jean region, where my family has lived for generations. I harvested trees by hand to pay my way through school. Now 50 years later, those forest areas are again ready for harvest, and someday I will retire to this same land that my great-grandfather tilled. Greenpeace is marauding not just our company but a way of life, one built on nurturing healthy forests that are the lifeblood of the people who live there. That’s why union leaders, small-business people, First Nations chiefs, and mayors and other government officials, of all political stripes, have written Greenpeace, imploring it to halt its campaign of misinformation. In nearly every instance, Greenpeace lacked the simple decency to respond, apparently indifferent to the human consequences of its actions. Last summer, nearly 5,000 people marched through the streets of the small northern Quebec town of Saint-Félicien, demanding an end to Greenpeace’s disingenuous market campaign. Recognizing that the very viability of their communities are now held in the balance, local leaders have even “extended a hand” for eco-activists to have a dialogue with them. It is telling that Greenpeace neither showed up nor responded. As a chief executive, I often meet and engage personally with our devoted employees at the local level, in the forests where they live and work. I know we share a common interest and a responsibility to sustain the forests for tomorrow. That’s why we’re not going to let Greenpeace get away with using “rhetorical hyperbole” to make false and damaging accusations from hundreds and thousands of miles away, in its glass-walled towers in Amsterdam, Hamburg, and Washington, D.C.  We’re going to stand tall, both in public discourse and in the courts. For my part, my guiding hope is to return to the forest with the ability to face my neighbors, my family, and my community and tell them that I stood up and told the truth. — Richard Garneau is the president and CEO of Resolute Forest Products.