The other day I went to the entrance of the Cuadrilla site at Preston New Road, near Blackpool. Unlike previous occasions there were no protestors there, though their photographer was walking up the the road and then took photos of me. Earlier the vestal virgins had been there as they are every Wednesday!

Hence I could wander around without being sworn at by the ladies present or interviewed by some clown thrusting a phone into my face.

Here are my photos with comments 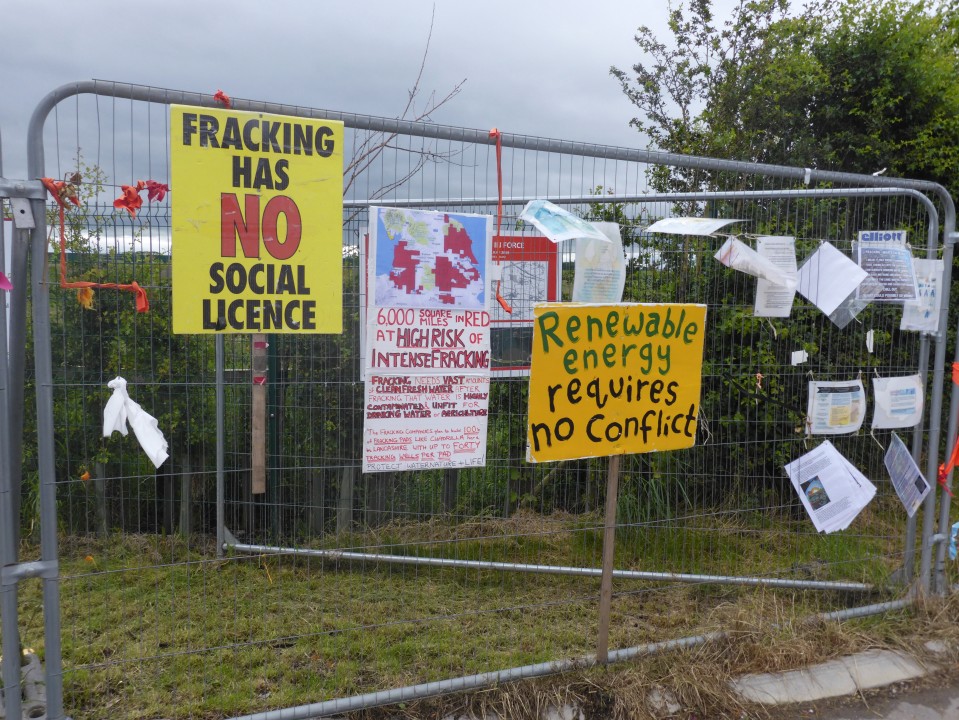 Here we go “No social licence” – whatever that means. The appeal gets boring and usually it means they have consulted protestors!

As for  “Renewable energy requires no conflict” that is face-palming. Each method causes conflict over the environment as wind, water and solar all have an environmental price to pay, whether threats to moorlands, valuable land submerged or simply the mining to extract metals needed.

As for people the conflict is there, whether loss of land for production, the visual impact etc. The protestors ignored the conflict over a wind farm at St Michaels, 10 miles from PNR, a few years ago – and other objections to wind and solar farms 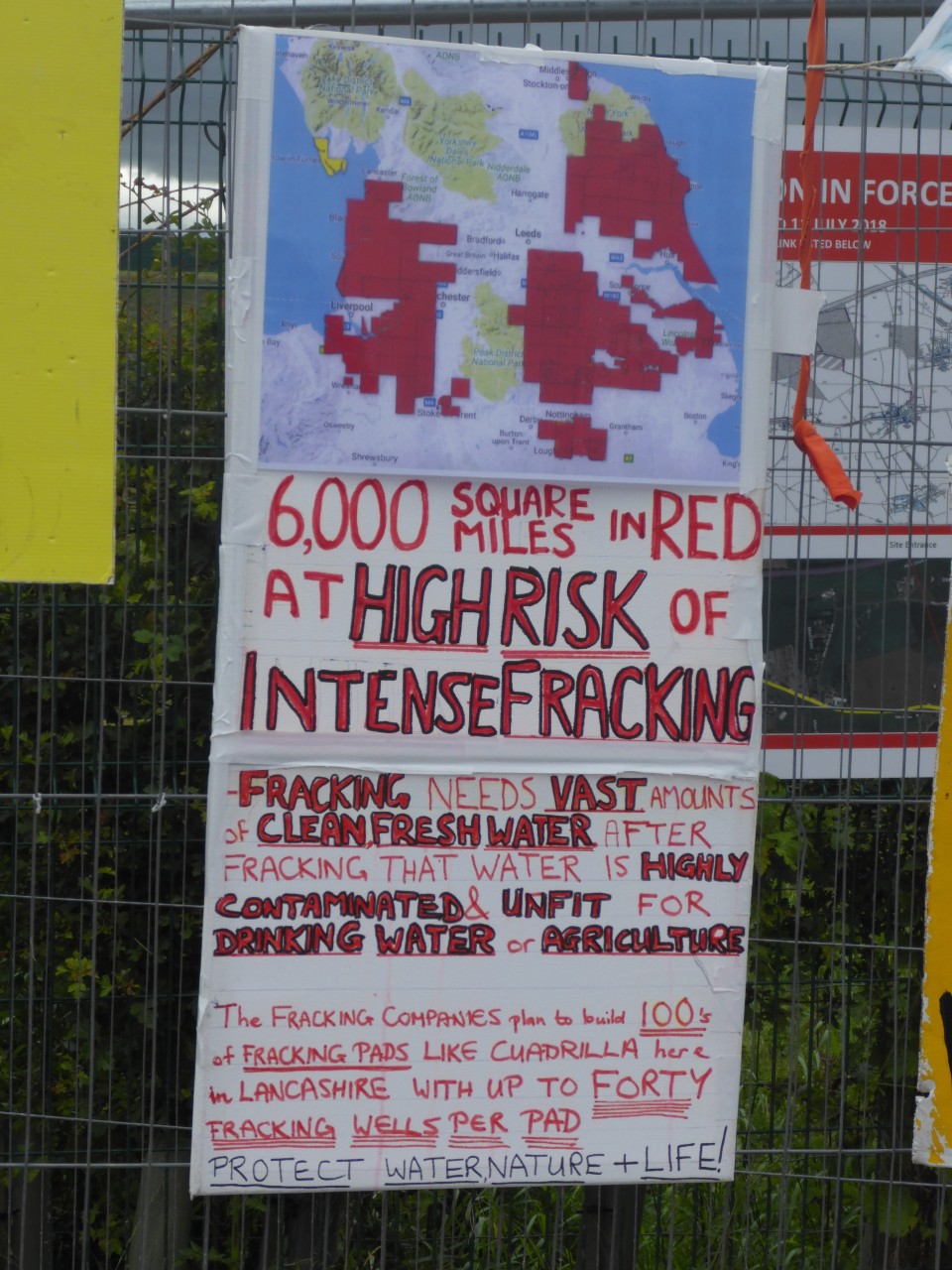 Fracking , like other industries, including farming, does use vast amounts of water, so what is the difference?

To say that after fracking the water is highly contaminated is an exaggeration. Of course it is not suitable for drinkng  or for agriculture, but neither is what you flush down your loo, unless you like cholera.

After fracking the flowback water cleaned up to Environmental standards, just  like your piss and pooh.

This is absurd beyond words

What about the 100s of toxic chemicals? That is perfectly true and were itemised in a paper some 10 years ago listing all chemicals which HAD been  used in fracking. Note the PAST tense and these are what HAVE been used in the past , not what are being used today. Today the fluid is 99% water, some sand and a few chemicals like surficants, which are used in many applications.

This is a dishonest and misleading claim.

One could also mention National Benzole, a fuel for cars up to the 60s which was rich in benzole or benzol – a coal-tar product consisting mainly of benzene and toluene. It was withdrawn for health reasons in the 60s.

The poster claims that the chemicals contaminate drinking water. Again that is duplicitous as the mixture if spilt could contaminate water, or rather water courses not water supply.

Of course the aim is to release methane as that is the point of fracking for gas. But any methane lost represents a loss of the product desired.

And the usual onEarthquakes!!!! Good scaremongering here as most don’t grasp how tiny they are.

Form what I’ve seen on the Fylde it is the protestors who are good at destroying communities!!

This poster is very challenging and the substance of many calls for divestment.

However it represents a gross misreading of the paper produces by researchers at University College, London, who argued, with good justification that;

That is very different from saying 80% of fossil fuels must be left in the ground.

Many green groups do this, including Christian Aid. Frankly it demonstrates either gross incompetence or blatant dishonesty

This raises some serious questions.

Why do the protestors  put up such inaccurate nonsense?

Why don’t they check out their facts?

Are they simply clueless or dishonest?

If it were a bunch of swampies with little knowledge then one could make allowances, but these protests are supported by the supposedly informed;

Why did they not criticise the inaccuracies of both these displays and the content of the material put out by these anti-frackers? (They could have commented on the stuff at Maple Farm too.) 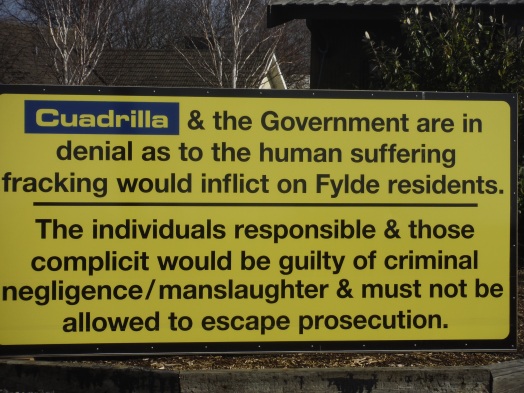 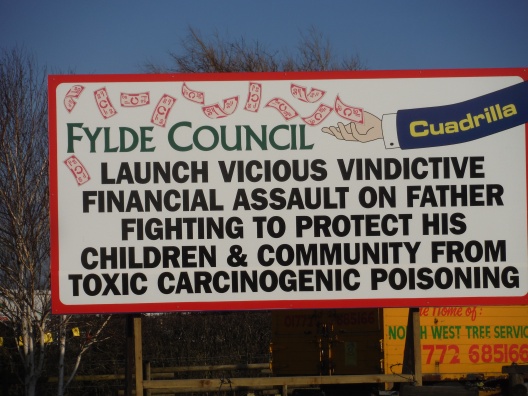 This stuff at Preston New Road  is the opposite of telling the truth, but so is much anti-fracking propaganda.