This week a local somerset paper published an article on the discovery of an ichthyosaur in about 1850. It turns out the man’s forbears dug it up in about 1850 and then buried as it upset his Christian faith.

The story of unearthing it again is fascinating, but toe comments on the religious issues almost suggests that the reporters had possibly drunk too much of Mr Temperley’s cider brandy.

To me, this story is interesting as it is an example of how so many people think that the church opposed every branch of science in the past and especially the most ungodly study of all – fossil dinosaurs.

Hence I scrape away the choss and other deposits from their historical howlers. and apologies for a not very accurate title, but the title in the paper is not attention-grabbing

A MAN whose Victorian ancestors buried a stunning fossil because it threatened their religious beliefs has had it dug up and put it on display for the first time ever.

Cider brandy maker Julian Temperley knew that a 90 million-year-old ichthyosaurus fossil was buried in the garden at his family’s home in Thorney, Somerset.

His god-fearing ancestors had kept it hidden away for years after its discovery in 1850, worried they would be ‘denying God’ by flashing it around.

I’d like to know on what grounds he says this. He says it was about 1850, when the vast ages of geology and exciting fossils like dinosaurs were known to the “common man” and accepted by most Christians, except for some belonging to separatist chapels.Few in the Anglican , Roman Catholic, Baptist, Methodist or Congregational Churches would have had a problem. In fact in Dorset you’d have to be aware of them through the work of Mary Anning and others. 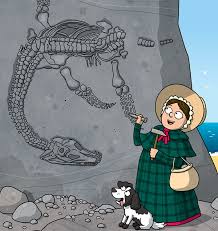 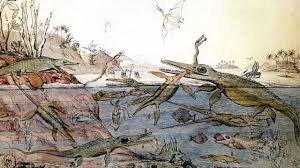 But flooding forced Julian to dig it up for good recently and after paying £3,000 for it to be cleaned he’s now having its image printed on his bottles of cider brandy.

He said: “Whenever we visited Somerset as kids, we dug it up and were generally amazed.

“But after the flooding of 2013-14 we realised it was not a good idea to leave it buried and I thought we ought to look after it.”

He said he had seen a TV programme about David Attenborough digging up an ichthyosaurus with professional fossil collector Chris Moore at Lyme Regis.

He added; “So we took our fossil down there to be cleaned and Chris said it was one of the best he’d ever seen.

“The teeth are still there in the enamel form after 90 million years, which is pretty good.

“We will now keep it on the wall of our cider brandy bond where it will be part of the family history.

“An image of the Temperley ichthyosaurus will also go on the label of our next 20-year-old cider brandy.

“Putting it with ageing spirits seems like the right thing to do.”

Julian said the amazing relic – worth more than £15,000 according to eBay – was first discovered by his ancestors.

This is simply not so. Mary Anning first discovered it three decades earleir and got leading geologists like the Revs Buckland and Conybeare to look at it.

He said; “It was found either by William Philosophus Bradford or John Wesley Bradford – my great-great-grandfather or his father – in around about 1850 in their lime quarry at Pitsbury near Langport.

“Not only were the two men founders of the now well-known Bradford’s builders’ merchants but they were also ardent Christians back in times when Darwin’s ‘Theory of Evolution’ had yet to hit the streets.

See what I said above. In 1850 most ardent Christians would accept ancient dinos and believe the Bible!! This is especially so among educated Christians and all the popualr edifying science and Christianity books of that time.

Here are 7 papers dealing with this at length

“They dug up sedimentary rock and burned it for the lime – and it was while they were digging in the quarry that they came across the ichthyosaurus. They took it home and buried it.

“You have to remember that fossils weren’t really explained until Darwin came along.

Ouch! Ouch! Ouch! Darwin was a genius but not that much! Fossils were first explained at length by Hooke  and many others in the 17th century. By 1800 many fossils were known and understood. The next fifty years saw an explosion in knowledge of fossils and Charles Darwin, simply joined in the fun as he did with megatherium in Brazil in 1832.

“Up until then, if you believed in fossils you were denying the Bible saying God created Day One, and so on.

This is the standard diet of those who imagine Christians had a problem over fossils. A handful did, but tried to explain them as being deposited by Noah’s Flood.

“It’s not the sort of thing you’d have flashed around because your local vicar wouldn’t have been that educated and wouldn’t have understood what it was.

Many local vicars were very well-educated, like Henry Moule a vicar near Dorchester and the inventor of the dry-earth closet. In the 1850s his care of parishioners suffering from cholera was heroic. He is immortalised in Thomas Hardy’s Under The Greenwood Tree as the new vicar who insisted on baptising with water and not his spittle.

“No sooner had he got here than he found the font wouldn’t hold water, as it hadn’t for years off and on; and when I told him that Mr. Grinham never minded it, but used to spet upon his vinger and christen ’em just as well, ’a said, ‘Good Heavens!  Send for a workman immediate.  What place have I come to!’  Which was no compliment to us, come to that.” (Chap II Meeting of the Quire)

Across the border in Devon was Henry Lyte who spent so much time in dank caves looking for fossils that he gave himself a mortal illness and awaiting death wrote “Abide with me”.

That’s ignoring all the clergy who came to see Mary Anning at Lyme Regis for her fossils, notably William Buckland and William Coneybeare.

In fact if many clergy were not looking for beetles or other natural history they were into rocks and fossils and many papers in the Proceedings of the Geological Society  in the middle decades were by clergy. With the professionalisation of both clergy and scientists that had stopped by 1900 and I don’t think the Geological society published anything by a vicar  (i.e. in charge of a church) until 2007.

“So, I can imagine that for the Bradfords it was an interesting thing that you buried and kept to yourself.

“Eventually, Darwin came along and convinced people that fossils weren’t anything to do with Satan.”

This is an old chestnut! It is often claimed that Christians thought the devil had planted fossils to deceive them and lead them away from Christ. I have never found an example of this or an actual reference to it. They may just possibly be one example. I consider it just a silly story made up to ridicule Christians and then used as such by those to lazy to do any historical research.

The ichthyosaurus was a marine reptile which lived approximately 200 million years ago during the Jurassic period.

At least they are right on this and corrects the original 90 million years, so I’ll conclude by giving them credit for this.!!!!

N.B. A Dorset knob is a hard dry savoury biscuit which is now produced by only a single producer, for a limited time of the year. Dorset knobs are made from bread dough which contains extra sugar and butter. They are rolled and shaped by hand. They are baked three times. They are made in Morecombelake near Lyme Regis betweeen Chideock and Charmouth on the Jurassic Coast. We spent many holidays there as a child and always bought a few large tins of them!

N.N.B. Knob has many different meanings , but here I mean the reporters have taken the biscuit!

2 thoughts on “Dinosaurs and Dorset Knobs”