History always has its twists and turns, some of which are unexpected.

Two leading Christian apologists for geology in the late Victorian period were Dawson and Wright. Both were very competent geologists. Dawson was THE leading Canadian geologist. His books on geology and faith are good, but he could not accept evolution. Wright from the USA was a league below and slowly rejected his earlier acceptance of evolution.

THE ANTIQUITY OF EARTH AND HUMANITY
Since the discovery of Deep Time in the eighteenth century, no geologist
could give dates for the age of the earth. Throughout the early
nineteenth century geologists tried culminating with the Rev. Samuel
Haughton’s estimate for the base of the Cambrian as 1,800 my in 1860.
The work of the physicist William Thomson (later Lord Kelvin) in the
early 60s soon reduced the maximum age of the earth to 100 my and
then to 24 my. Most geologists, including Charles Darwin, capitulated
to these estimates though it mitigated against evolution. Kelvin’s dates
were widely accepted until the first attempts of radiometric age-dating in
1905.

Of more concern to evangelicals were arguments for the antiquity of
humanity put forward from about 1860. Before then evidence was too
scanty to give any firm date. So long as humans had only existed for
only some 10,000 years, one could adopt a chronology similar to Ussher’s.
Lyell in The Antiquity of Man (Lyell, 1863) concluded that humans first appeared
100,000 years ago,which was unacceptable to most evangelicals, as
it challenged any semblance of history in Genesis 4–11. Van Riper (1993)
groups responses from 1855 to 1880 as Lyellian (100,000 years), Prestwichian
(20,000 years), and traditional (Ussherian?) (6000–8000 years).
The first group included Darwin, Huxley, Lubbock, and Wallace, and
the last were confined to religious publications. The Canadian geologist,
J. W. Dawson (1820–1899)

who reckoned he had discovered the oldest fossil-form and named it Eozoon canadense in 1864. He thought it was a   sponge or giant micro-organism. His ideas were challenged and in 1894 geologists found similar rocks in material at Vesuvius.  What was a sponge was in fact limestone altered by magma.

continually argued for a traditional date and
at his death was the only leading scientist not to accept evolution. From
1860Dawson published many books reconciling geology and Christianity,
with titles like Archaia (Dawson, 1860) and The Story of the Earth (Dawson,
1874). These exude geological competence, but he always favored Kelvin’s
shorter timescales (Burchfield, 1976) and a low human antiquity, which
was music to evangelicals as they could retain the traditional chronology,
which Schofield put in his Reference Bible of 1909.
Another evangelical geologist, George F. Wright (1838–1921), a Congregationalist
minister who was encouraged to take up geology by Asa
Gray, was persuaded against his earlier Darwinian views by considerations
of geological time. From his early years he took an intermediate
position between Lyell and Darwin on one hand and the heirs of Ussher
on the other.

In the 1870s and 1880s Wright was Darwinian as expounded
in Studies in Science and Religion (Wright, 1882), but retained the special
creation of humans, as did Wallace. After he returned to Oberlin College,
Ohio, in 1881 he began an intellectual drift to the right but continued his
fieldwork on glacial geology. He began to question evolution partly because
the materialism of Spenser and Huxley. He also was worried by the
Higher Criticism of C.A. Briggs.When he first heard Briggs in 1891 he was
convinced that Moses did not write the Pentateuch. On reflection he reacted
against Brigg’s liberalism and became more conservative and began
to associate evolution with higher criticism, a position still put forward
today.
In 1892 he published Man and the Glacial Period (Wright, 1892) which
is a useful compendium on the state of glacial studies. I found it useful as a source for victorian glacial studies, but it has drawbacks. 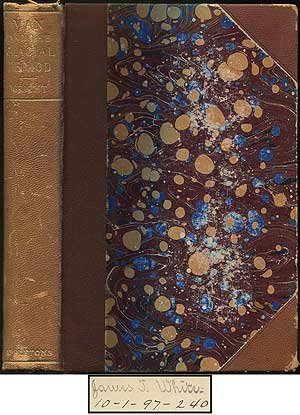 Wright hoped
for a favorable response. That was not granted him, as he insisted that
there had been only one period of glaciation, and rejected the findings
of recent glaciologists, who had unraveled a series of Ice Ages rather
than one as was originally thought in 1840. Wright concurred with Joseph
Prestwich, that the one Ice Age had lasted 25,000 years, but by the 1890s
few geologists accepted that and Wright was taken to task by the geologists
Chamberlin and McGee, the latter calling him as “a betinseled charlatan.”
Dana regarded McGee’s dismissal was “a disgrace to American Science,”
but Numbers is correct to state that Wright’s “theological convictions had
undoubtedly colored his scientific conclusions” (Numbers, 2006, p 44).
In The Origin and Antiquity of Man (Wright, 1913) he reiterated his case
and refused to accept “Man’s origin by purely naturalistic agencies.” He
argued that the earth was less than 100 million years old and that life,
that is the base of the Cambrian, began some 24 million years ago. These
conclusions, drawn from Kelvin, allowed him to accept a short 25,000
year Ice Age. Even so, he followed Flinders Petrie’s dating of the first
Egyptian dynasty at 4777 BC. On geological time Wright was restrictive.
He objected to Lyell’s “unlimited” geological time with the base of the
Cambrian 500 million years ago (close to today’s 550 million years). He
commended Darwin for downsizing his almost limitless time in 1859 to
some 100my and favored Walcott of Burgess Shale fame and a Presbyterian
for allowing only 27.5 my. It is difficult to be certain why Wright changed
from a thoroughgoing evolutionist to a skeptic who took a limited view
of geological time, which hardly gave time for evolution. Numbers (2006,
pp. 33–50) gives some pointers.
Time, they were a-changing! A few years before in 1905 the English
physicist John William Strutt, later Lord Rayleigh (1842–1919) began to
apply radioactivity to date rocks and showed that a mineral containing
radium was 2 billion years old because of its helium content. In the same
year Bertrand Boltwood suggested that Lead may be the end product of
the decay of uranium and calculated the ages of forty-three minerals from
400 to 2,200 my. The radiometric dating game had begun and by 1913
Arthur Holmes (1890–1964) in The Age of the Earth reckoned the base of the
Cambrian to be 600 my and the age of the earth to be 1.6 by. Geologists
would never again talk of less than billions. The immediate effect was to
render untenable any suggestion that humans had been around for less
than 50,000 years. The loose agreement with “biblical chronology” which
Dawson and Wright claimed was consigned to history. From then on the
choice was, either to accept billions of years for the age of the earth and a
100,000 years or more for humans or to accept that humans are recent that
is less than 20,000 years and to REJECT all radiometric age dating. As we
shall see that first occurred in the 1930s and became a major thrust of YEC
after 1961.

To insist as Wright did for a single Ice Age only 20,000 years ago and that humans are of the same antiquity is to open the way to reject radiometric age-dating and thus for Young Earth Creationism. Thus enabling Henry Morris to flourish

It is sad that two competent scientists left a questionable legacy which has done harm both to Christianity and science.

2 thoughts on “Easing the way for Young Earth Creationism; the case of J W Dawson and G F Wright in 1900”