Yup, that’s it! When you go to Cirencester Parish Church you take communion with the Devil.

Cirencester is the capitol of the Cotswolds and an ancient market town going back to Roman times. We often stop there returning from the tumuli around Stonehenge. The centre of the town is the massive parish church dedicated to John the Baptist, which is apt considering the funding of the tower. 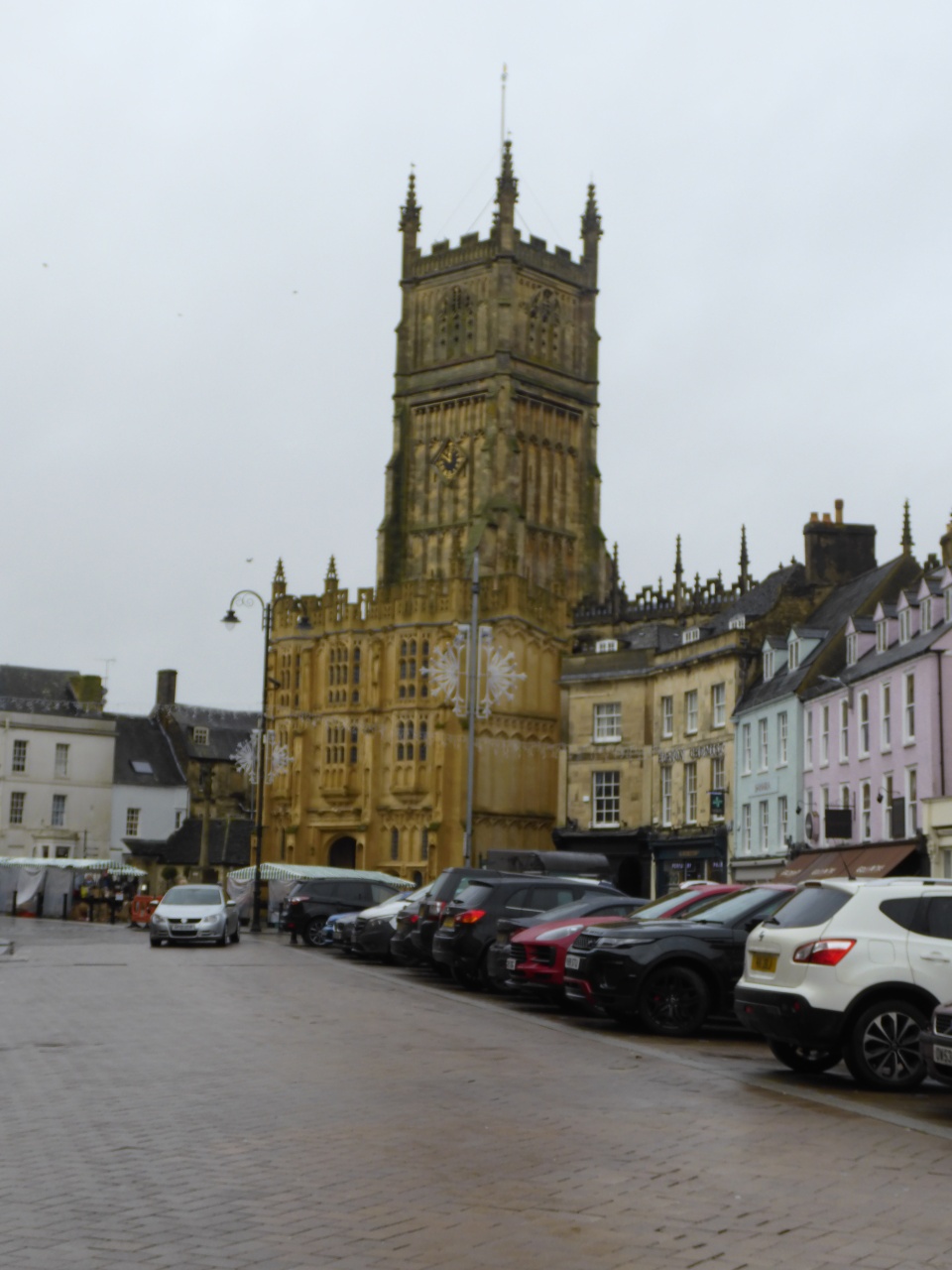 A vast medieval  church like indicates one thing; WOOL. The wealth of England in the middle Ages was built on wool whether in the Cotswolds or the Yorkshire Dales. Many wool merchants became the equivalent of billionaires, but the downside was that the sheep munched all the wild flowers.

The chancel is the oldest part of the church. Construction started around 1115. It was widened in about 1180. The east window dates from around 1300. The original stained glass of the east window has long since disappeared and it is now filled with fifteenth century glass from other parts of the church in a patchwork quilt of glass with the Devil taking centrestage. 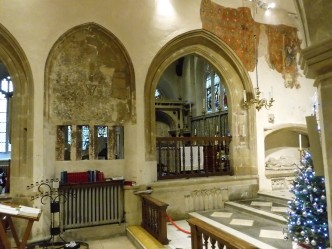 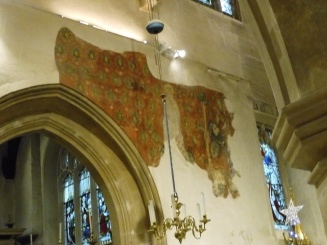 To the north of the chancel is St. Catherine’s Chapel which dates from around 1150. It contains a wall painting of St. Christopher carrying the Christ Child, and vaulting given by Abbot John Hakebourne in 1508.

The nave was completely rebuilt between 1515 and 1530 and is a remarkable example of late perpendicular gothic architecture.

The tower is fifteenth century and remarkable for the large buttresses which shore it up at its junction with the nave. It was built with blood money as Henry IV gave money for it to say thanks for the heads of Richard II’s half brothers, which were sent to Henry on a platter  (or should have been, noting its dedication), after being beheaded in the market place outside the church.  And so construction began soon after the 1399/1400  “rebellion”, which was part of the Wars of the Roses.

The great south porch which adjoins the market place was built around 1500 at the expense of Alice Avening.

Oddly the nave was built last of all and so making one building connecting tower and nave, which is the highest of any English church, but not cathedral. (The downside today are the horrendous heating bills.) 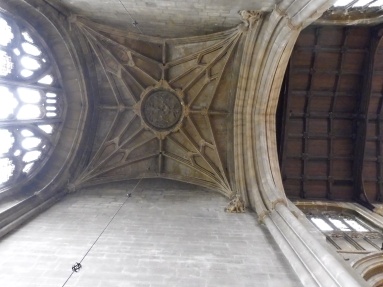 The vista is vast and I cannot think of a more massive parish church. 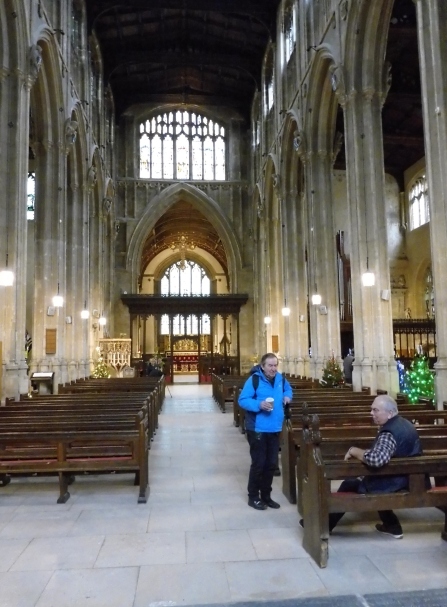 The view down the aisle from the tower is impressive with a verger and churchwarden in the foreground. And thanks to the warden for giving me a guided tour.

Walking down the aisle you see the rood screen with the altar, reredos and east window beyond. 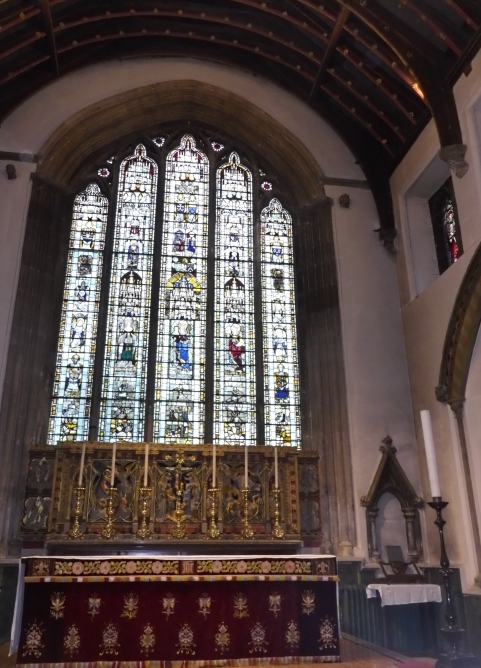 Now let’s say you are at a communion service and have come down the aisle to receive communion , the body and blood of Christ. Once through the rood screen, you see the the alter, which is rather large and not the plain wooden table of the Reformation. 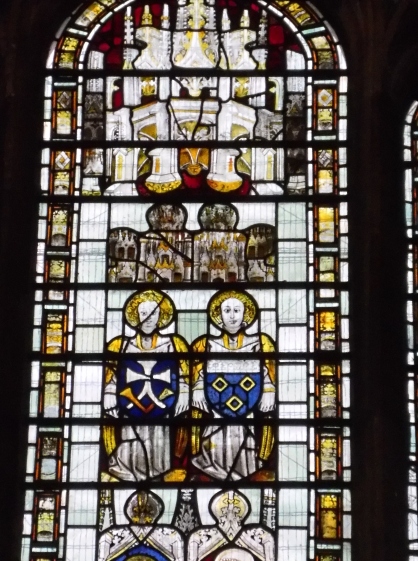 If you are from Garstang like us and irreligiously looking at the crazy east window you will see the arms of wool merchant Mr Garstang who’d moved south from Garstang to make his fortune. But your mind should be on higher things.

A few steps more and you have a closer view of the alter and very ornate Victorian reredos, surprisingly not in wood.

Then before you kneel at the altar rail, there is a devilish face looking at you from the east window. Yes, it is the devil seeking those who he/it can lead astray.

Yes, it looks almost mischievous, but we know that sin, or whatever it is that makes us do wrong, humorously leads us in the wrong direction.

At this point it is best to kneel and immediately the Devil has gone. As we receive the fortifying bread and wine, the body and blood of Christ , the devil is overcome as the early church thought. This is best seen as Jesus though the cross defeating evil and forgiving us and then through his rising again opening the way to a new life.

As Paul wrote to the wayward church in Corinth

The Institution of the Lord’s Supper

23 For I received from the Lord what I also handed on to you, that the Lord Jesus on the night when he was betrayed took a loaf of bread, 24 and when he had given thanks, he broke it and said, ‘This is my body that is for[g] you. Do this in remembrance of me.’ 25 In the same way he took the cup also, after supper, saying, ‘This cup is the new covenant in my blood. Do this, as often as you drink it, in remembrance of me.’ 26 For as often as you eat this bread and drink the cup, you proclaim the Lord’s death until he comes.

and in Paul’s letter to the Colossians

21 And you who were once estranged and hostile in mind, doing evil deeds, 22 he has now reconciled[j] in his fleshly body[k] through death, so as to present you holy and blameless and irreproachable before him— 23 provided that you continue securely established and steadfast in the faith, without shifting from the hope promised by the gospel that you heard, which has been proclaimed to every creature under heaven. I, Paul, became a servant of this gospel.

I hope all who worship at Cirencester find this a great aid to their faith and trust in Jesus Christ.

For me it made a very serious point on the human condition and its solution in a rather jokey way.

Perhaps we need more jesters explaining the gospel of Christ and fewer showmen and pretend academics.