One of my favourite Christmas Carols or hymns is Joy to the World, with words by Isaac Watts and a tune by the heavyweight composer G F Handel.
In fact it is hardly a Christmas Carol and is based on Psalm 98. Edit. My American friends insist it is not a Christmas Carol but a more general hymn! Maybe they are right, but my comments on the third verse still hold!!

O sing to the Lord a new song, for he has done marvelous things. His right hand and his holy arm have gotten him victory.
2 The Lord has made known his victory; he has revealed his vindication in the sight of the nations.
3 He has remembered his steadfast love and faithfulness to the house of Israel. All the ends of the earth have seen the victory of our God.
4 Make a joyful noise to the Lord, all the earth; break forth into joyous song and sing praises.
5 Sing praises to the Lord with the lyre, with the lyre and the sound of melody.
6 With trumpets and the sound of the horn make a joyful noise before the King, the Lord.
7 Let the sea roar, and all that fills it; the world and those who live in it.
8 Let the floods clap their hands; let the hills sing together for joy
9 at the presence of the Lord, for he is coming to judge the earth. He will judge the world with righteousness, and the peoples with equity.

When you compare the hymn with the psalm, it is clear that Watts dealt with the words very freely, but has made the psalm into a superb creation hymn with an implicit, but no more than implicit, reference to Jesus Christ. I wonder whether it is more suitable for the Creation Season than Christmas, but I will still use it for Christmas!!

Recently I read an interesting blog by Albert Mohler on the hymn. Mohler is a Southern Baptist who has shoved the Southern Baptists in a more reactionary direction in the last decade. I am no fan of his, but follow him as he is significant in the USA. He is also a young earther, which does not draw me to him. His recent blog on 8/12/17 caught my attention as he discusses the much-omitted third verse of this hymn. Here it is; 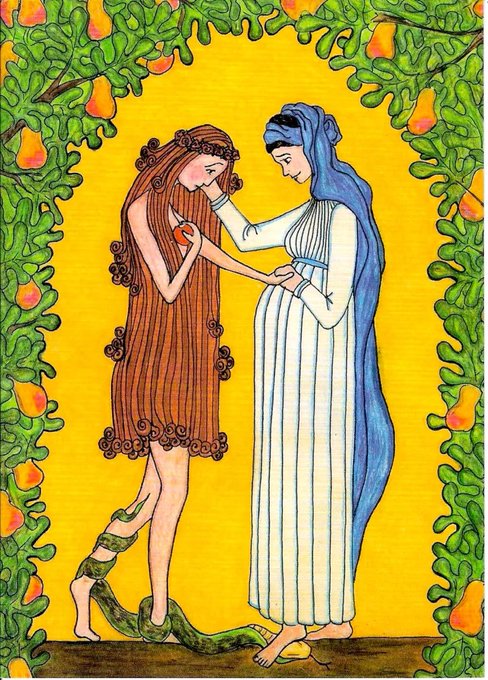 This painting by   Sr Grace Remington brings out the common symbolism of Gen 3. 15 with the pregnant Mary putting her heal on the serpent. There is no curse in this picture.

I winced as I read this, with its way of reading Genesis 3 with a CURSE afflicting the whole of Creation. I’ve written on this before and especially the influence of John Milton from Paradise Lost; https://michaelroberts4004.wordpress.com/2016/02/19/why-the-apple-didnt-kill-adam-and-eve/

Mohler is very much in the tradition of Milton! His blog is found here and included at the end https://albertmohler.com/2017/12/08/far-curse-found/?mc_cid=2244bcb749&mc_eid=9710ba7c22
Mohler takes the typical 6-day creationist view of the Fall as historical, with Adam’s fruit-eating resulting in god cursing the whole of creation, causing thistles and predation! He then stresses that Jesus’s death on the cross not only gives redemption to humans but also reverses the effects of the curse. (not that I can see that when the local cats eat our birds or I struggle with thistles.) Many YECs use their belief in a CURSE as why they must reject all science which demonstrates an ancient earth and evolution. After all, there can be no curse if T Rex munched other dinosaurs.

There are many problems with the so-called CURSE. Why would a loving god inflict all this “suffering” on animals who had never met humans, like Smilodon or even canivorous dinosaurs and trilobites?

Of course, Mohler would collapse 4,560,000, 000 years into Ussher’s 6021 years  (4004BC + 2017AD when he wrote it), with creation in a mere 144 hours. More than that, however “literally” we read Genesis 3 it does not actually teach a CURSE as the language of Genesis 3 vs 14-18 is to elusive and poetical to conclude such a firm and harsh conclusion. I also reckon that it is a totally unsuitable reading for the first lesson of the Service of Nine Lessons and Carols. I would replace it with Ecclesiastes 4 vs 1-6.
Mohler then writes,

“Where is the curse found? Everywhere we look, we see the curse and its malignant effects. How far does it extend? To every atom and molecule of creation — from coast to coast, shore to shore, sky to sky, and to every square inch of the planet. That’s how far the curse is found.”

I am trying to visualise how all chemical reactions are CURSED and wonder how the CURSE afflicts the outermost reaches of the universe.
All in all, by emphasising a CURSE Mohler makes everything about Jesus Christ more incredible and rather bizarre, where Jesus seems to have been born in Bethlehem to correct the naughtiness of a pair of prehistoric scrumpers, rather than sorting out the folly and moral stupidity of the human race giving both a new and living hope and a guide for life, far better than any other way. Thus we think of Jesus Christ when we sing;

But I couldn’t possibly sing verse 3.

Here’s Mohler on the third verse. i simply don’t believe a word of what he wrote!! But then I don’t think god was so miserable to inflict a curse on the whole of Creation. Thorns were there millions of years before Adam!

https://albertmohler.com/2017/12/08/far-curse-found/?mc_cid=2244bcb749&mc_eid=9710ba7c22
Think with me about verse three of the hymn, in which we read,
“No more let sins and sorrows grow, nor thorns infest the ground. He comes to make his blessings flow, far as the curse is found, far as the curse is found.”
The reversal of the curse is promised in the coming of the Messiah and the fulfillment of his atoning work. Implicit in this third verse is the promise of the new creation. We live in light of that promise, even as we look back to Bethlehem and as we celebrate Christmas.
But look carefully at the reference to the curse. Christ’s victory over sin is declared to extend “far as the curse is found.” What curse? How far does it extend? Where is it found?
We find the curse in Genesis, chapter 3. After Eve has eaten of the forbidden tree, and then Adam also ate, and after they found themselves facing God in the reality of their sin, God first cursed the serpent:
The Lord God said to the serpent, “Because you have done this, cursed are you above all livestock and above all beasts of the field; on your belly you shall go, and dust you shall eat all the days of your life. I will put enmity between you and the woman, and between your offspring and her offspring; he shall bruise your head, and you shall bruise his heel.”
Then, God cursed the woman:
To the woman he said, “I will surely multiply your pain in childbearing; in pain you shall bring forth children. Your desire shall be contrary to your husband, but he shall rule over you.”
Then came to curse to Adam, and through Adam to all humanity:
And to Adam he said, “Because you have listened to the voice of your wife and have eaten of the tree of which I commanded you, ‘You shall not eat of it,’ cursed is the ground because of you; in pain you shall eat of it all the days of your life; thorns and thistles it shall bring forth for you; and you shall eat the plants of the field. By the sweat of your face you shall eat bread, till you return to the ground, for out of it you were taken; for you are dust, and to dust you shall return.”
By Adam, our federal head, the curse of sin came upon all humanity. We are dust, who must return to the dust, for the wages of sin is death. All creation is under the effects of the curse. “Cursed is the ground because of you,” Adam is told.
The curse is God’s righteous judgment of sin, and the effect of the curse is death. The curse has fallen upon all human beings, first because of Adam’s sin and then because of our own. In Adam, we all sinned. In Adam, we all died.
Where is the curse found? Everywhere we look, we see the curse and its malignant effects. How far does it extend? To every atom and molecule of creation — from coast to coast, shore to shore, sky to sky, and to every square inch of the planet. That’s how far the curse is found.
Most importantly, every single human being is found under this curse. “For there is no distinction, for all have sinned and fall short of the glory of God” (Romans 3:23).
So, how can we sing about joy to the world?
Look with me to Galatians 3:10-14:
For all who rely on works of the law are under a curse; for it is written, “Cursed be everyone who does not abide by all things written in the Book of the Law, and do them.” Now it is evident that no one is justified before God by the law, for “The righteous shall live by faith.” But the law is not of faith, rather “The one who does them shall live by them.” Christ redeemed us from the curse of the law by becoming a curse for us—for it is written, “Cursed is everyone who is hanged on a tree”— so that in Christ Jesus the blessing of Abraham might come to the Gentiles, so that we might receive the promised Spirit through faith.
Here is the gospel of Christ, the good news. But first, the bad news. All who rely on works of the law are under a curse. All humanity is born under this curse, and under the law. The congregation that originally received Paul’s letter would have understood immediately where Paul grounded his argument, in Deuteronomy 27 and 28. At the end of the series of curses God delivered from Mount Nebo, we find the most comprehensive of all: “Cursed be everyone who does not abide by all things written in the Book of the Law, and do them.” [Paul in Galatians 3:10, citing Deuteronomy 27:26]
We are born under the curse, we are cursed by the curse, and the law offers no escape. We cannot work our way from under the curse.
So where is the good news? Where is joy to the world? Look at verses 13 and 14.
Christ redeemed us from the curse of the law by becoming a curse for us. What we sinners could not and cannot do for ourselves, Christ has done for us. He removes the curse and the power of the law to condemn us.
How? He redeemed us from the curse by becoming a curse for us. The sinless Son of God became incarnate as the Word became flesh and dwelled among us. That sinless Son of God became sin for us, in order that we might become the righteousness of God (2 Corinthians 5:21). He became a curse for us, by hanging on a tree, in fulfillment of Scripture.

2 thoughts on “Joy to the World, a great carol with a cursed verse!”