Many wildlife programmes are all about sex and violence, but the former is almost entirely hetereosexual and rather rough. We may watch and say “We are not like that”, but some look to animal sex and say “We are like that”.

After all, we are only animals!! And so we look for animal behaviour to justify our own behaviour. Gone are the days when we say “Nature red in tooth and claw” (Incidentally pre-Darwinian) and prefer cuddly images like bambi. Maybe we prefer Kropotkin to what we think Darwin said. But this is about the seaside instead.

The latest comes from tweets and a magazine article of Sussex Wildlife Trust. Now wildlife trusts do a great job and are doing wonders restoring lowland peat bogs in Lancashire and Cheshire. But Sussex Wildlife Trust with their Kelp Restoration Project  are concerned about seahorses in the coastal seas, which are unusual as the male carries the young. They could be said to get pregnant.

The article; From a natural spectrum springs a rainbow is a romp though non- heterosexual activity among animals, especially bonobos

This wild notion of a male-less matriarchy led me on to some primate research looking at Bonobo chimps, closely related to humans they too have sex for fun, recreation not procreation. Bonobos not only form matriarchal societies but are also fully bisexual and the females tend to have more sex with other females. Research suggests that the evolution of same-sex sexual behaviour may have led to pathways promoting high levels of cooperation, basically queer peace-keeping. This promoted a new personal moto of mine, “Be more Bonobo” and this knowledge gave me a new found space for my own sexuality in the context of evolutionary theory.

This seem to be a spin on bonobos, but no worries.

Can one seriously say “Be more bonobo”? The mind boggles at the thought of any carrying that out in a small or large groups. Imagine being more bonobo at a wildlife trust meeting. Not even wild seahorses would make me do that?

And she concludes with her local favourite  – the sea horse – where the male gets pregnant. However I cannot see what that has to do with sex-life, but she ends;

And finally the incredible seahorse species that in my opinion can claim the throne of the animal drag-kingdom in having the only true reversed pregnancy.

Now, with my work for the Sussex Kelp Restoration Project much of my favourite flagship “queer” marine species are linked directly to our conservation work here on the Sussex Coast. For example bottlenose dolphins who are known to engage in homosexual behaviour and sex for fun, again thought to increase social bonding and cooperation. The black seabream which are all born female and change to male at maturity (known as protogynous hermaphrodites). And finally the incredible seahorse species that in my opinion can claim the throne of the animal drag-kingdom in having the only true reversed pregnancy.

I’m sure Darwin would agree that rather than it all being about nature versus nurture we should focus more on nurturing our true nature, that part of us that is wild and free and far from binary. Wouldn’t it be dull if everything were so very black and white… life and love is in fact gloriously technicolour thanks to evolution’s rainbow.

All this was picked up by Jerry Coyne, an evolutionary biologist who has little time for god-botherers like me. I confess that I like him on evolution and he usually goes in with all guns blazing, especially on us Christians!! But I like much of what he writes. Here, as a leading biologist who really knows his stuff, he points out the serious flaws in the article;

Now people can find solace where they will, but I think it’s misguided to look to nature to validate a behavior in humans. For every mammalian species that shows homosexual behavior, there are a dozen who don’t.  (Do those show that homosexuality is “unnatural, ergo wrong?” Of course not!) And homosexuality in humans, which often involves attraction solely to members of your own sex, is not at all the same thing as homosexual behavior in dolphins. For when a the male wants offspring, he knows where to go. Should a rapist find validation by studying ducks?

Once when cycling down the Lancaster I stopped to be a voyeur on several drakes copulating with one female in what seemed to be most viciously. If we drew a human parallel it would be gang rape. Inicidentally it is sometimes fatal for the female. 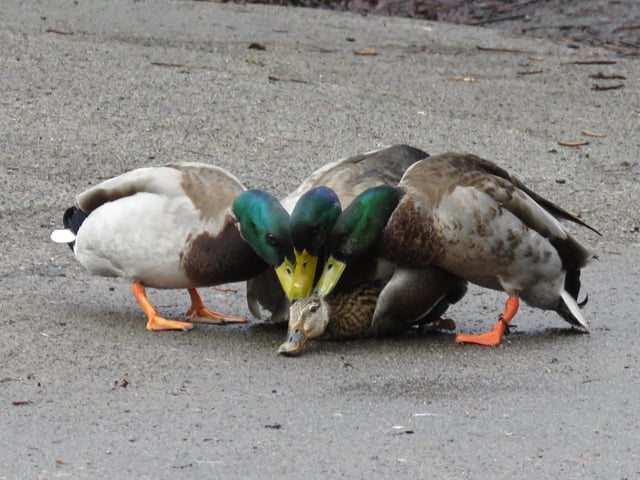 and so Coyne concludes

I was both amazed and appalled by the article, which is very shoddy science. It should not have been published as it reflects badly on Wildlife Trusts. I am a member of the Lancashire Wildlife Trust and respect their work on peat bogs and re-introduction of plants.

Coyne makes it very clear that we cannot draw such simple validations of human behaviour from animal behaviour and shows this is an example of the “naturalistic fallacy”.

To put it baldly, should we follow chimps or bonobos?

These attempts to refer to nature as a way of validating human behavior, morality, or ideology is, of course, an example of the “naturalistic fallacy,” usually described as the fallacy of saying “what’s seen in nature is good in humans.” And it’s a dumb fallacy, because a lot of animals behave in nature in ways that we would consider immoral in our own species. (Chimps, for example, attack other bands of chimps and rip individuals apart while they’re still alive. Some spider females kill and eat males after mating.) We can’t look to nature for morality, because, at bottom, nature is amoral, for animals don’t have the capacity to argue and make considered judgments about how to behave. Often “considerate” behavior towards others is the evolutionary product of reciprocal altruism or kin selection.

So when the Sussex Wildlife Trust tries to use the pregnancy of male seahorses as a justification for “queerness”, as they do below, they’re committing the naturalistic fallacy. The reason we shouldn’t discriminate against non-cis people is because discrimination is wrong and hurtful, not because male seahorses (and, by the way, male pipefish and sea dragons, contra the tweet below) get pregnant. Mallard drakes sometimes kill females during forced copulation, which in humans is the equivalent of rape. Does that make rape okay? You get my point.

Coyne could not be clearer.

What is natural is to some animals may be highly immoral for us supposedly moral humans. Coyne gave some grim examples. Here’s another, when a lion takes over a pride of lionesses, he kills all the cubs so that females are then receptive to him. I doun’t think anyone would say that behaviour is right for humans, though, sadly, something as nasty does happen at times.

If you scream against these examples, then you don’t like getting your morals from the animal kingdom as we get in this article.

Which would you prefer? Being a chimp and beating up any you don’t like, or “Be more bonobo” and have sex with everyone we meet whatever gender?

Rather be more human and work out what our morality, sexual and otherwise, ought to be

I  am sure that Coyne, as an atheist, and I, as a Christian, would diverge on many aspects of behaviour, or perhaps not, but neither of us get our morality from seahorses, however wild they are. I suggest that we strongly diverge on what we base our morality, but that would make another discussion! I think I am far closer to Coyne on ethics than to Sally Ashby.

This was summed up by Rev Charles Kingsley, author of The Water Babies in a letter to F. D. Maurice in 1856;

I have long ago found out how little I can discover about God’s absolute love, or absolute righteousness, from a universe in which everything is eternally eating everything else ….. The study of nature can teach no moral theology. It can unteach it, if the roots of moral theology be not already healthy and deep in the mind.

Seahorses are lovely creatures but give no guidelines for our morality or sexual expression.