Here is an interesting letter to The Times  (5/2/22) on the energy crisis of today. Not all will agree with it but I think it is spot on. 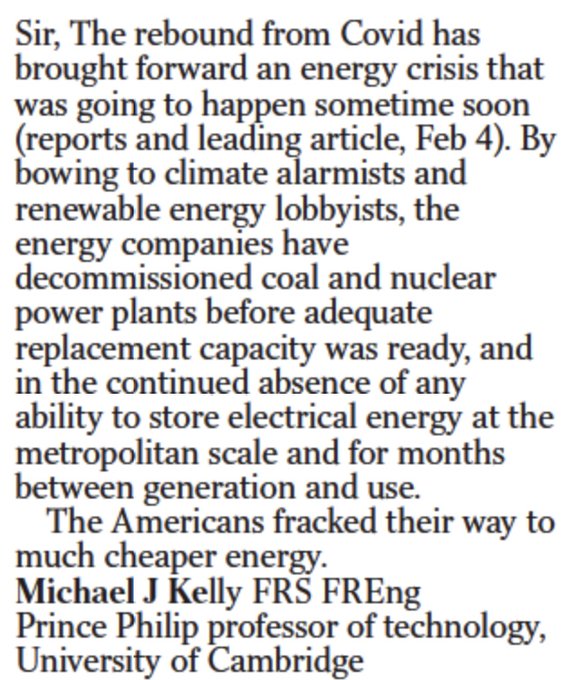 As a Christian I always get narked at those like Richard Dawkins who say that us believers go for faith without evidence and thus what we believe is unprovable and untrue. I could write on this, but suffice it to say that there is evidence for the existence of Jesus and details in the New Testament. But I won’t be a God-botherer today.

For many years I have got increasingly fed up with appeals for “renewables” as if they will solve every energy crisis. A times it comes out as a mantra or an item of credal faith. Most green groups from FoE, Greenpeace to wildlife Trusts  and the National Trust sing from the same hymn/herrsheet. It is now political orthodoxy in all parties; Greens, Labour, LibDem and tories as they are swept along with the renewable tide, as if they can replace fossil fuels NOW..

I suggest they never look at the figures for energy sources for electricity production. When it is windy like today (and far too windy to cycle 6th Feb 22) renewables, largely wind, make a good showing but as soon as the wind drops gas is ramped up and coal comes into play.

One of the best accounts of why renewables are no panacea is to found in Prof dieter Helm’s recent book Net Zero, how we stop causing climate change.  Helm is no climate denier or sceptic but is fully aware of problems, both technical and political. The section on pp34-6 should be read by all. In the last y30 years renewables have made virtually no contribution to energy demand. Period.

December 2021 was a time of no wind and little sun and renewables flopped – ein dunkelflaute as the Germans would say. More gas was used and also coal. 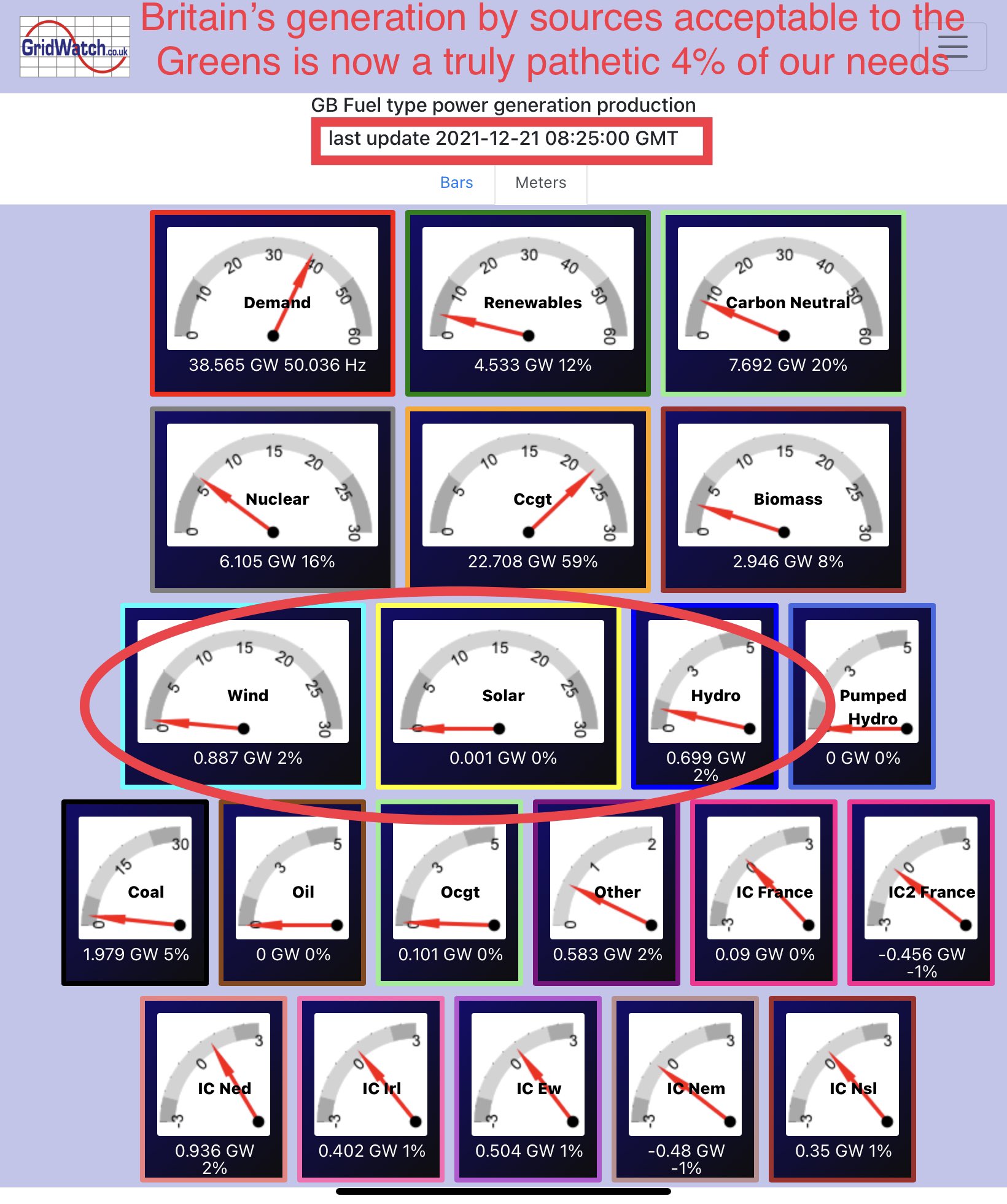 This figures for one day show that renewables are very far off from making a real impact, yet for a decade it has almost been an item of faith that renewables will provide. At times some will just say the word “renewables” as if that will provide the power. No kid, I’ve heard it too many times. Within the churches, the Ecocongregation project is almost entirely in favour of renewables.

What so many fail to see is that the transition away from fossil fuels cannot happen overnight, whether for electricity or transport. On average renewables may produce nearly 50% of electricity (but not heating and transport, which is often ignored), but on a cold windless winter’s night, with a ridge of high pressure, renewables will produce nearly zero.

The usual green narrative is completely blind to this and think fossil fuels can soon be phased out. Oh that they could be! The transition has two major hurdles, the first is the capability of renewables which is a long way off, The second is less obvious and is the immense amount of additional metals needed for the transition, eg Cu, Co, Ni, Li and the rare earths. To give an indication; just to provide 100% replaced by electric cars the consumption of Copper needs to double from now on from the present usage of 100,000 tons. That requires some very large copper mines. One of the largest in Southern Africa is Tsumeb in Namibia which produced about 1.7 million tons of copper in the century it was open.  That is 20 years supply for the UK. Now multiply that for every country to go electric! Many do not acknowledge this major hurdle.

Those most qualified to judge have made this clear many times, but amateurs from green groups continue with the mantra of renewables.

Just consider two with much understanding

not be in the money anytime soon  ix

He says that bowing to climate alarmists and renewable energy lobbyists, coal and nuclear plants were decommissioned before replacements were in situ. Totally right. The clamour from Greeenpeace, Friends of the Earth, echoed by many green groups, almost drowned out other voices, which were easily dismissed as Climate Deniers. I was told that if I supported fracking I was a climate denier. Once was by a fellow vicar who thought Acetic and Citric Acids were pollutants used in fracking!!!!!  I could also add most Green groups and all political parties as the CEN Conservative Environmental Network are all opposed to nuclear and coal, especially the latter.

Kelly points out that decommissioning of plants  was done before replacements were in place. Thus with coal power stations gone, there was no generating capacity to make up for the shortfall from renewables, which could not produce in the absence of wind and sun. This is simply folly and the collapse of power generation or the problems of the turn of 2021-2022 was made inevitable. No one , or only a few, wanted to retain coal, but until cheapish and reliable energy comes on line the risk is too great, especially for the poor, who have to use a higher portion of their income on fuel and electricity.

On paper the replacement capacity of renewables seems good and comparable to fossil fuels. But there is a very big BUT. However big the capacity is, no electricity can be generated without wind and sun. When it is windy greens crow about the fact that 50% of electricity is being generated by renewables but silent the next day when the wind drops and little power is produced. Then gas kicks in and, what is worse, COAL.

Kelly also points out there is no way to store more than small amounts of energy on  a large scale, as without that any excess electricity produced simply goes to waste. Yet many simply believe without evidence that these are in place. He could have pointed out that wishful thinking will not produce energy and you cannot use technology which has not been invented or is not yet on line. None of this can be magicked into existence by ditching fossil fuels and nuclear. Taking a long view in the early 70s GranadaNW had a series on a house powered by renewables. It was great to watched and filled myself and others with hope, but that hope has not been fulfilled despite all the R & D.

And so his finale on fracking. Despite much hostility fracking has been successful in the USA, with relatively few problems. Most of these were caused by individual bad practice or “litigious individuals”. As in the UK opponents were often rather economical with the truth. The UK story of fracking is a sad one as greens of all kinds made a crusade against and were also economical with the truth. It foundered on minor tremors which almost certainly caused no damage, despite the likes of Geza Tarjani claiming that the 2021 “earthquake” (Mag 2.1) damaged his house and became one of the most tire**** protestors against fracking. He has recently been charged in connection with Sajid Jarvid’s home https://www.lancs.live/news/lancashire-news/leyland-man-geza-tarjanyi-denies-22945802

Freinds of the Earth were censored by the Advertising Standards Authority for an inaccurate leaflet some years back. https://michaelroberts4004.wordpress.com/2017/01/04/friends-of-the-earth-fck-it-up/

It is concerning that leading green groups do this and that government continues to listen to them.

Kelly is totally clear that our present energy crisis is self-inflicted and the result of listening to green scare stories.

The result has to raise the cost of energy and everything else and also drive more people into fuel poverty.

When you get your extra high fuel bills, this will direct your thoughts on who is to blame.

1 thought on “Who caused the present energy crisis?”