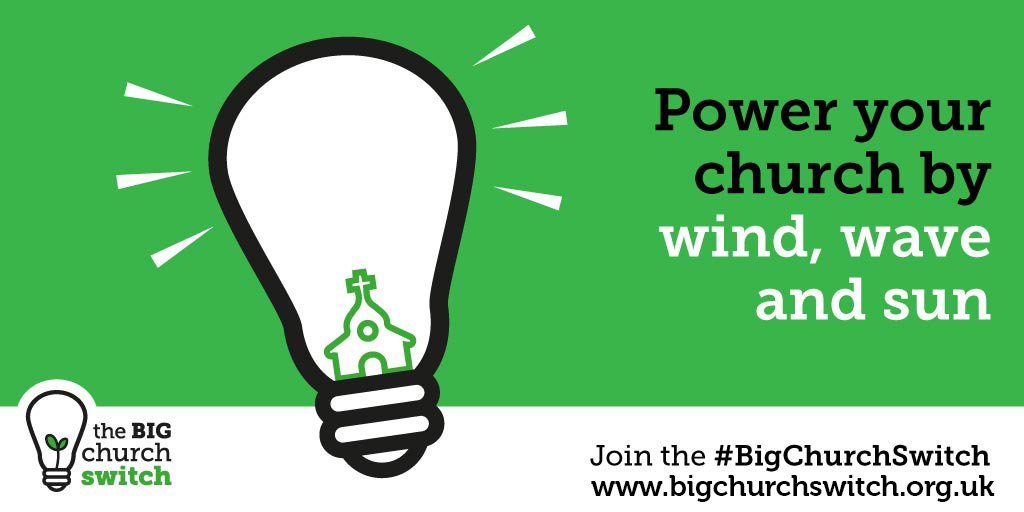 One of the recent environmental campaigns in the churches is the Big Church Switch, which encourages local churches and individuals to switch to Green, renewable suppliers for electricity.

The Big Church Switch calls on churches and individual Christians of all denominations to switch their energy supply from fossil fuels to renewable energy, as part of their commitment to care for our neighbours and for the earth – our common home. By using clean, renewable energy we can help restore the earth and bring balance to God’s creation. Clean energy sources offer a reliable energy supply and secure long-term jobs, fuelling prosperity for our neighbours near and far. By acting together as the Church community we will send a clear and powerful message to governments and businesses that Christians are prepared to lead the way and that switching to renewables is crucial if we are to live in and enjoy God’s world together.

Collectively as the Church we have huge buying power and can secure some market-beating renewable tariffs. Whether you want to switch your home or inspire your church to switch, we will guide you through the process so that you and your church can switch in a simple and affordable way to a tariff that restores, rather than damages, creation.

Partner organisations have been working closely together in the process of the careful selection of suppliers. This will ensure that the offers from renewable energy suppliers meet stringent criteria in terms of customer service and providing value for money

This sounds marvellous but it puts blind faith in renewables, as if they would cure the energy and climate crisis overnight. In fact, it is a faith which falls into the Dawkinites’ definition; “Faith is belief without evidence”. To make this change , sufficient renewables need to be in place, such that a complete change to renewables could occur in the near future. Or,  at least. renewables such as sun, wind and wave, do provide a moderate proportion of our energy.

The actuality is very different as the graph below shows. Renewables provide a whopping 1.5% of the world’s energy consumption as the graph shows as opposed to nearly 85% from fossil fuels. The annotations on the graph shows that the transition from fossil-fuels to renewables is a vast mountain to climb, reducing Everest to a mole-hill. The mountain is even bigger if nuclear energy is rejected as the Big Church Switch implies.

The picture is no better for Britain as the following slide shows with renewables producing less than 5% of our total energy usage. Yes, there are times when renewable electricity production well exceeds 20% but that it only on a very windy day

There is a danger, which is often succumbed to, of confusing electricity production with total energy. Electricity is about half of the total energy used as so much is used in transport,  industry and heating. So often this is overlooked, either deliberately or due to incompetence not understanding energy.

Even so the contribution of renewables is still very low as the next slide shows.

The next slide shows the contribution of renewables to the total energy used in various European countries.

Even Germany, which has rejected nuclear and emphasises renewables has not fared well. In fact, be rejecting nuclear they have used more lignite or brown coal , which makes ordinary coal seem quite clean.

The following graph shows the worldwide energy deficit from 1990 to 2035  if fossil fuels are removed. The deficit in 2015 was 10,000 million tonnes oil equivalent with non-fossil fuels producing about 2000.

It is obvious that the deficit is enormous.

And so to the child in the back seat asking, “are we nearly there?” The answer is NO, we have only just left home.

I would be wonderful to say that the transition period will be only a few years, but energy transitions take decades on the world stage (if pushed graph back to 1800 biofuels i.e wood would be nearly 100% and even in Britain, then the most industrialised nation, coal was hardly dominant. Renewables are now in the same position as oil and gas were in a century ago.

However much we long for “clean” energy, it simply will not happen overnight. It is here where so many concerned environmentalists seem to leave realism behind and opt for blind faith. Before anyone concludes that I am not an environmentalist, I stress that I am but we have to take the world as it is and not how we dream it to be.
This is the failing of many green groups and especially those like Greenpeace or friends of the Earth, though the former UK director of Greenpeace, Stephen Tindale is a beacon of light and a source of wisdom. He has a wise and pragmatic approach to the conundrum of energy. Many Christian green groups seem to follow Foe and Greenpeace and have a naive faith in renewables  (and also in organic food and a rejection of GMO).

Thus the publication Bright Now  produced by Operation Noah takes a very one-sided view rejecting fossil fuels and arguing for renewables NOW. Their argument is dependent on the ideas of Lord Stern and the Centre for Alternative Technology and ignores the powerful GREEN voices, like Dieter Helm in The carbon Crunch who argue that fossil fuels cannot be ditched over-night and a transition period is essential. Of course, they do accept the fracked gas will be needed as a transitional fuel thus destroying their green purity for many. The paper Bright Now  and other resources on divestment in the churches can be found on http://brightnow.org.uk/resources/

I would suggest none of church commentators on energy, divestment (or fracking) have, or had, any involvement with mineral extraction or energy. Two Christian geologists of my acquaintance who have worked in mineral extraction independently told me that so many Christians have no idea where their minerals or fuel actually comes from. Most people are unaware that they have to be forced out of the ground whether through open-cast mining as for Lithium for renewables, or blasted from underground mines as for much copper (to make that personal I worked in a copper mine and a mine captain conned me into going into a stope about 15 metres by 3m by 4m, just as blasting was taking place. I also once got Carbon Monoxide poisoning because of his shoddy leadership.) Compared to that the extraction of oil and gas is relatively benign!

Of course, the reply will be an appeal for “clean” energy. there ain’t no clean energy , it is all dirty, whether through opencast mines for Lithium, the great expenditure of energy to build the turbines, not to mention the large holes needed for a base for a turbine.

I enjoy showing that photo as I am usually told it is a fracking site!! I dread to think of the damage to peat bogs on our upland areas, where turbines are placed

Similar attitudes are to be found in the churches’ environmental project Ecochurch , which expects ecochurches to opt for a clean renewable supplier.  http://ecochurch.arocha.org.uk/how-eco-church-works/

I am aware that I am going against the contemporary environmental thinking of the British churches, but I was convinced that the environment needed caring for way back in the 60s after reading Rachel Carson’s Silent Spring.  It was reinforced by working for a mining company in Africa, both in a mine and in exploration, and for many decades have attempted to lead a life more sympathetic to the environment. Perhaps my time in mining made be both wary of polluting, unsustainable industry AND the need to provide our material needs.

and what fossil-free really means for most of our world.

That is a surprising statement for someone to make when he read Rachel Carson’s Silent Spring  half a century ago and has been green ever since.

I can boast like the apostle Paul in 2 Corinthians 11! But I am not speaking like a fool 🙂 Every garden of mine has had a compost heap, I tend to grow organically, plant flowers, shrubs and trees to attract wildlife, ride a bike when I can (and even more so for fun), energy economical – or bloody mean and keeping the heating down; and lots of other things to get brownie points from treehuggers. I have voted Green and been active in Friends of the Earth.

However, I confess that the disimulation and nastiness of anti-frackers made me reconsider my green credentials.I found greenie Christians , as a whole, no better as so many repeated the dodgy dossiers of Greenpeace, Fiends of the Earth , Frack Off and the rest of them, and often think I don’t care for the environment because I think f***ing is a good rather than a bad thing.

So I had to become a Green anti-green. Or so I thought until I came across the alternative, which goes by the clumsy name of Ecomodernism.  I stumbled across it and as I read it, I found that it summed up the position I had come to myself as I rejected the orthodox green faith. I had to apostasize from evangelical greenery as I found they were not quite honest and from their moral high ground didn’t give a damn for the poor especially those freezing to death. Far too many in Britain are living like this;

But back to Ecomodernism.

You will find their manifesto here

To comment briefly on the Manifesto; many criticise their split of intense human habitation and wilderness, where they argue agriculture should be intesive rather than centred on small farms and small-holdings. At first I baulked at that and then realised we have no choice if we are to feed the world, which I consider a moral imperative. As for wilderness, which I love, it is not suitable for much human habitation without wrecking it.  An example of wrecked wilderness is the south rim of the Grand Canyon, which has less feel of wilderness than many of the hilly parts of Britain.

Grand Canyon wilderness seen from the south Rim. LH picture is the Bright Angel trail which makes a nice August day’s walk RH is the Unconformity

He discusses the three main approachs from Bill McKibbin, who sticks to protesting not realising that this will not change everything despite Naomi Klein, through Al Gore and Lord Stern, who try too hard to face both ways to the Ecomodernism of Nordhaus and Shellenburger, who have recruited Mark Lynas to their ranks.

In his paper Nisbet presents the different stances on the various issues in the table I reproduce below. (apologies for the imperfect copying)

Sometime I would like to write up a Christian Ecomodernism, if only to counter the Bambi eco-theology.

During the Climate Change meetings in Peru, activists aka lawbeakers from Greenpeace trespasses a Nazca to make the demonstration, damaging the site in the process

This is common practice for Greenpeace who often break the law all in the name of protecting the environment, but here they are wrecking it.

As news of this came out they said sorry, but that is not enough.

Surely it is time to see though their immoral antics and regard them as enemies of the environment and not protectors?

Greenpeace have also opposed GMOs for years and are strongly suspected of damaging trial crops of Golden rice. As a result they are accused of killing thousands and allowing millions to go blind.

In Britain their latest campaign has been agfainst fracking/shale gas with their duplicitous Not for Shale campaign, which has probably made residents in Lancashire lose value on their homes.