Jesus was NOT a refugee

Over the last few years there have been many refugees and migrants coming to Europe from North Africa and the Middle East. Some come as far as Britain. No one can fail to be touched by their plight. This year we have witnessed the Rohinga refugees from Burma or Myanmar escaping into Bangladesh, with stories of child rape as well as murder. Some girls are dressed in obviously boy’s clothes for their protection.

Not that refugees are new, but for decades there have been vast numbers of refugees who may be stuck in camps for decades. 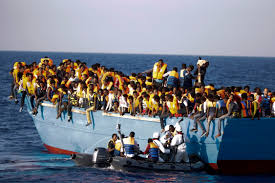 Edit 2 dec 2021. Many of my details are out-dated especially after the horrific recent drowning of 27 migrants in the English Channel.

Then, many in our world are gripped by poverty, both in Britain, but especially in what was called the Third World.

Most of us in the affluent and effluent West need challenging over these sufferings and there is much in the New Testament and the prophets in the Old Testament to goad us.

However one pair of arguments is very appealing to many, whether Christian or not. This is the claim that Jesus was born into poverty and was a refugee as his family was forced to go to Bethlehem and then flee to Egypt. This is the stuff of much Christian writing and sermons and is found in carols;

Mine are riches, from your poverty

It is a theme in Christian art as the Rembrandt shows

To question or challenge this is to fly in the face of so many sermons and so much Christian appeal to care for those in need, especially refugees. No one with even the weakest of morals could challenge the moral appeal of this, but is it actually true that Jesus was born in poverty and was a refugee. It is good for heart-strings and goading people into action, but is it actually true?

So what about it?

Was Jesus born in poverty?

Was Jesus a refugee?

If we answer “yes” to both, we can make a powerful argument for action on both fronts. But what if neither is true? Or even not quite true.

Let’s consider them with the Birth Narratives of Matthew and Luke ever present. I shall ignore questions of historicity as then would completely derail any discussion. Many use the narratives for moral arguments but hold to varying amounts of historicity or even none. I won’t consider whether Jesus was born in Bethlehem or whether the flight to Egypt took place, or Quirinius’ census. However I will consider the moral and spiritual message of the narratives and ignore historical questions.

Was Jesus born in poverty?

The Gospels are pretty lean and mean on what they say about Jesus’s home background and wealth. Joseph was a carpenter or builder, and so they asked in the synagogue at Nazareth Matt 13vs55 “Is he not the son of carpenter?” We can argue whether tekton  means builder or carpenter. It does not matter as both are artisan skills and that indicates that Jesus’s family were at least artisan and thus not in poverty. With other incidents, like going to Jerusalem at the age of twelve Luke 2 and the wedding at Cana John 2, the evidence points to being anything but in poverty. They were probably not rich, but by no means living in a state even approaching poverty. It is best to say Joseph was comfortable and probably no more than that.

The Holy Family were comfortable by the standards of their day. They did not live in a palace, but in no sense could they be called poor. Joseph and Mary would neither have clothed their family in rags or “fine raiment”.

Was Jesus a refugee?

On the former and taking Luke’s cryptic account in Luke 2 at face value, Joseph did not flee his adopted town of Nazareth to take refuge in Bethlehem. The reason of the journey was clear. According to Luke, the governor Quirinius had ordered all to go to their home towns for the census. With the Roman authority behind it, there was no desperate flight and would have had a semblance of order. I doubt whether the journey was enjoyable, but suspect they were with others on the journey. Further the family later returned to Nazareth. The journey would not have been pleasant for Mary, but the 70 mile walk to Bethlehem would have been a Sunday School outing compared to the Rohinga fleeing from Myanmar and many other refugees in recent years, including those in the turmoil of WWII. Though that it cannot be regarded as gospel, the Proto-gospel of James written in about 150AD supports my contentions.

And so they came to Bethlehem, where undoubtedly many of Joseph’s relatives lived. It is inconceivable to go along with the traditional story and conclude they were turned away by the inn-keeper and were shunted off into an outhouse or cave. But Luke does not say that and some argue the Holy Family were given a guestroom. If Luke were right then many, but not fleeing hordes, would have made the journey

The flight to Egypt

After the magi went, they had to flee to Egypt to avoid Herod’s wrath. Matthew tells us little and so the story has been embroidered by later writers. Ignoring the embroidery there was an excellent coast road through Gaza to Egypt, which would have made the journey relatively straightforward. The road was used by Roman soldiers as a main route so would have been good.

Matthew only says they “remained there until the death of Herod.” He gave no clue to where they went, but there was a large Jewish population in Alexandria. The great Jewish thinker and philosopher Philo lived there from 25BC to 50 AD. If that is where they went, there were many fellow Jews and probably kinsmen. No one would like to uproot with a tiny baby but this is nothing like the usual ghastly situation of refugees, whether we think of Ruhinga, those crossing the Med, or the many others we have read off in the last 50 years..

We may say they took refuge but were not refugees.

We can safely conclude that Jesus was not born in poverty, nor was he a refugee in the usual sense of being caught up in an enforced mass migration simply fleeing some horror.  Yes, they were forced to go to Bethlehem and then as a family had to take refuge in Egypt

If we take the New Testament picture of the holy family, we must conclude  that Jesus’s home was “mediocre” and neither rich nor poor. By virtue of being a builder or carpenter, Joseph’s family were definitely not poor, and not suffering from poverty. Joseph and Mary would not have taken Jesus to Jerusalem when he was 12  (Luke 2) if they were in poverty. Snapshots of their family life as in the miracle of Cana in Galilee (John 2) reflect an ordinary family, neither rich nor poor. Further they – and especially Jesus, were literate and knew the Scriptures. They wore neither “soft robes” nor rags.

Jesus was NOT born into poverty

So we have lost a powerful and emotional argument to care for the most deprived.

What can we base our appeals for action on?

It is far easier to use an emotive argument like “Jesus was a refugee” than to give the straight (boring ) and didactic Christian teaching. I wonder if the appeal to Jesus as a refugee partly stems from a general acceptance of Liberation Theology, which though rightfully emphasises the need of the poor,  but far too quickly pushes aside any concern for the rich or even the unpoor and unrich. It also moves the centre of gravity of the Gospel from Jesus Christ to the liberation stories of Exodus. I need to add here that I started reading Liberation Theology a few years after returning from Apartheid South Africa in 1971, where I acquired the nickname Comrade Mike! (I cannot state what other nicknames were, but I shared one with Atticus. I found it wanting, and then wondered why it became so popular.

To base ones practice on many issues and not only the issue of refugees and migrants, one needs a basic grasp of Christian teaching in relation to ALL people, before moving to particular groups.

First is the Second Great Commandment “you shall love your neighbour as yourself” which is the basis of all Christian behaviour.

This crops up in so much of the New Testament eg I Cor 13.

Then, secondarily,  we have aspects of the Old Testament (which must always be seen in the light of the NT. The New Testament always trumps the Old Testament!  No we don’t imitate Sisera or stone homosexuals etc) There are the caring aspects of Law (Exod 23 vs1 -9, & especially vs 9 You shall not oppress a resident alien .. For you were aliens in the land of Egypt)  and prophecies i.e forthright forth-telling of the prophets (e.g Isaiah 61 vs 1 – 2 which was cited by Jesus in a Nazareth synagogue – Luke 4 vs 16ff) and many of the prophets who were FORTHTELLING against wrong-doing and injustice  and were not concerned with FORE-TELLING.

However all that was enough for getting rid of slavery in about 1800  and many other things great and small, whether education, hospitals, orphans (Barnardo) , The Childrens Society and so many other things right across the denominations.

It should also be enough to see that migrants crossing the channel may need to be rescued by the RNLI, which is obliged to rescue those in peril on the see whoever they are. Those  who criticise the RNLI clearly don’t follow our Lord’s Second Commandment and need to realise that all lives matter!!

We need to follow the example of Jesus and his teaching on love rather than making him out to be a refugee.

1 thought on “Jesus was NOT a refugee”